"If God hadn't meant us to eat animals, he wouldn't have made them meat-flavoured..." 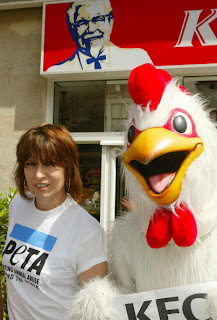 There's a Bob Monkhouse joke about vegetarians in the Bible, who had there been any, would have "killed the fatted cabbage", thereby re-influencing all Christian dietary habits thereafter.

The very carnivorous Kevin Day once asked the Loose Talk audience if there were any vegetarians among them, only to add "yeah there is, but they're not strong enough to put their hands up".

Jeremy Clarkson went on Room 101 to bemoan "vegatablists" who expect you to cook an entirely separate meal for them when you have the grace to invite them to a dinner party, before expounding on a comically rational theory that the only way to preserve all animal species, endangered or otherwise, was to eat them.

Soap operas have mentioned it, in passing. The only episode of Brookside I ever watched involved a siege (about 1986?) during which one of the hostages was a committed vegetarian, but ended up scoffing meat as she was starving and it was all that was on offer. Maxine and Ashley briefly became vegetarian in Coronation Street, much to the chagrin of Fred Elliott, master butcher of Weatherfield. And Harold Bishop was a vegetarian in Neighbours, despite accidentally once eating meat in a stew he began to cook but then left to Eileen Clarke, who added ham to it without telling him.

Yes, vegetarianism is both a serious issue and the butt of many jokes, mainly at the expense of those who practise a herbivorous lifestyle. But yesterday, for the first time ever, I learned of someone who had given up many years of flesh-free diets and returned to meat consumption.

And it kind of knocked me sideways, genuinely so. Vegetarians don't do that, do they? Whether their commitment to such a lifestyle is through principle or just what their palette prefers, I assumed it was a case of once a veggie, always a veggie. Yet I suppose that a quiet commitment to vegetarianism, as opposed to a Hynde-esque political struggle against farmers and their customers, is as susceptible to change as any other lifestyle habit, such as drinking and smoking.

I am an animal lover but have rarely considered vegetarianism. I think it's more than possible to be both pro-animal and pro-meat. The food chain is nature, and we're merely at the helm. I like roast beef, bolognese sauce and bacon sandwiches (not on the same plate, although then again I've never tried that...) way too much to ponder giving them up. I don't like lamb at all, am so-so with pork and can do without most poultry, though the turkey at Christmas always goes down well. My taste in meat is limited but it does exist.

There are the meat substitutes of course. I remember Sissy Rooney got chucked out of the Big Brother house because, among other things, she was a vegetarian who - and this is the killer - also didn't eat Quorn. So the grocery budget had to have a vast percentage of it thrown to one side to satisfy one solitary person's medically-unrelated dietary needs and as there were still ten people in the house and money was tight, she had to go.

But while I can understand meat substitutes, I can't understand the need to make products that resemble meat in looks as well as taste. Vegetarian burgers, for example. Why make burgers? Why not just eat the vegetables? Is it about keeping up with everyone else? If so, what happened to all the revolutionary principles that go with not eating meat? "I don't eat meat, but, well, I want to look like I do..."

Then there are the half-committed vegetarians, like those who eat poultry only. They call themselves "vegetarians, except for chicken". That makes me a teetotaller, except for Guinness and the odd bottled lager on warmer days. Nonsense.

Howard Jones, my childhood hero, was such an extremist in vegetarian issues that he tried to get the family dog and cat to eat meat-free pet food. Only the dog conformed. As everyone knows, dogs eat what you give them and cats eat what they like.

My "lapsed" ex-vegetarian friend, whom I won't name in case he has militant pals who will call him a traitor and smear his windscreen with deer's blood after reading this, says he had "few, if any, principles behind it" and so regarded it as "pointless" and re-invested in steak knives, a George Foreman grill and a tenderiser. Maybe he sees it as a growing up exercise, which is harsh on him as he is already at the highest of maturity levels (except when ratted).

But either way, despite all the vegetarians I've known (and I'm related to one, shared houses with at least two others, used to go out with one, and can think of half a dozen more whom I've known or worked with), he is the first I've ever heard of who has happily ditched the lifestyle and reverted back to how God (through his messenger Fred) apparently intended. I suspect there aren't many like him.
Authored by Matthew Rudd
Email ThisBlogThis!Share to TwitterShare to FacebookShare to Pinterest

I'm with you. I love meat and while I dont' eat it every day I couldn't do without it.

Sometimes we have a veggie dish, not always consciously - it just doesn't have meat in it. I like veggie food as long as it's interesting. Can you imagine being a vegan? Talk about a joyless existence. You can't even have honey!

I object to militant vegetarians like Chrissie Hynde lecturing others on what to eat. In some parts of the world people don't have the luxury of being able to make such choices. She should remember that.

Perhaps if she ate a lamb chop now and then she wouldn't be such a humourless bitch.

I hate animals so would gladly eat them all. Yes, even dogs, cats, horses, blue whales. Meat's meat, right?

"Perhaps if she ate a lamb chop now and then she wouldn't be such a humourless bitch."

Haha, F-C statement of the week, surely. That's had me laughing like a fucking drain all day.

I aim to please.

Another lapsed vegetarian putting his hand up here - 8 years in the service of kindness to beasts down the drain because I moved to east London and couldn't come home from a piss-up without getting a kebab on the way home. I suspect that my initial commitment to the whole cause stemmed from vague concerns about ickle baa-lambs and the fact that I was trying to impress my vegan girlfriend. Of course there were lapses - during my finals, I went slightly mad and cooked steak every night - and I was always happy to eat fish or seafood - meat is murder, fish is justifiable homicide. I don't have a problem cooking for vegetarians when they visit. I still have a few neat recipes in my head from my own days as a herbivore. I do have a problem with pious vegetarians, though.

Which brings me neatly onto Chrissie Hynde. A friend of mine shared a flat with her in her pre-fame days, and delighted in making bacon sandwiches whenever she was around, whether he wanted one or not.

I've never understood the 'substitute' thing either. Stuff like Quorn seems so pointless and it seems hypocritical to declare that you won't eat meat but want to eat 'pretend meat'.

And as for these petfoods that advertise the fact that they have vegetables in them; well that's just bizarre to me.

If someone tells me they are a vegetarian I get wary. I find a lot of vegetarians intolerant and pedantic.

The world is a cycle of birth, life and death and feeding off each other is what living things do; be it animal or vegetable.