"The next voice you hear will be your mum's..." 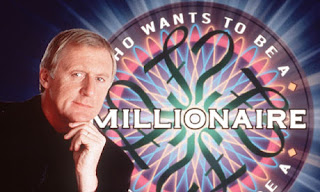 I was watching the football tonight and, upon the shrill of the half time whistle, did a spot of channel-hopping. I happened upon Who Wants To Be A Millionaire? on ITV1, a programme that was once discussed round every watercooler in the country.

Like, I suspect, many more people, I haven't watched Millionaire? for years. Yet within seconds of finding it here I stayed tuned in as Chris Tarrant mentioned that the middle-aged lady in the hotseat was from Brough. If you've ever driven or travelled by train to Hull from the west or south then you'll always go through Brough. Nice place.

So, with a slightly tenuous local interest, I eschewed the restart in the Champions League and stuck with the last 25 minutes or so of Millionaire? as this lady blundered and quipped and twittered (in the traditional sense; modern day twittering would be regarded as cheating, I fear) her way through questions she didn't know the answer to but, by hook or by crook, managed to get right nonetheless, eventually reaching £75,000 before a question about the first ever House of Lords speaker finally dried up her luck and she ran back towards the A63 with the cheque.

Do you remember just how massive Millionaire? was when it first arrived on our screens? It was ten years and more ago. It is the simplest of formats - Chris Evans describes it in his (very good) book as the best format for a TV show he has ever seen - and it just seems so odd that the finest creators of TV concepts never came up with something similar in all the years of gameshows that preceded it.

It was high noon, with the contestant sweating and worrying while Tarrant offered a mixture of concerned assistance and clownish goofing in order to fulfil his brief of reassuring the competitor while entertaining the audience. The music was brilliantly dramatic, a mixture of stabs and underscores that could be fired off the playout systems whenever the situation demanded it. The tension sometimes was unbearable, especially if you were yelling the answer at the television while someone in the studio was deliberating, a mixture of bewilderment and self-doubt.

I remember one woman going over the answers to a question over and over again and eventually blurting out in all her desperation: "Oh Chris, I don't know what to do!" You felt for her. You also wanted to reach through the screen and offer a hug to the woman who, upon reaching the £8,000 mark, looked at the gurning multi-millionaire Tarrant and explained, coldly and matter-of-factly, that as a nurse and single mum this was already a sum that would transform her life.

There was the controversy over Judith Keppel, a woman as unlikely an applicant for an ITV quiz show as you could find (though the money on offer does dispense with principles; you couldn't imagine Judith doing Pass The Buck or Keynotes, really) as she was, as Ian Hislop put it, "a rather agreeable woman who lives in Fulham". For a good while questions were asked about whether she was planted as the first millionaire of the show because of the clash with the final episode of One Foot In The Grave on the other side. Given her wretched performances on Eggheads, she was either a set-up or just fantastically lucky. A sport question on £2,000 would have sent her home early.

The major and his wife, and the terrifically-named Tecwen Whittock, all conspiring to get an evidently unintelligent man all the way to the million. The bloke who struggled and spluttered and agonised his way through to half a million and then didn't know where Chester-le-Street was. The guy who changed his mind a thousand times about the occupation of Tom Cruise's Jerry Maguire, before finally choosing the right answer.

And the tricks were soon learned. Don't use Ask The Audience after around £4,000 as you'll get a mega split, as too many simply won't know. Don't say out loud what your suspicions are before taking 50/50, as the computer will always "randomly" leave you with the two answers you were most attracted to. Don't be afraid to take your time - the also-rans on contestants' row, despite being desperate to try another Fastest Finger First, would do the same were it they in the chair.

I didn't know, such was the length of time since I last saw it, that the prize money ladder had been altered and now a thousand quid was achievable - and guaranteed - within two questions. A bit late to comment on this, I suspect, but the one thing Millionaire? lacked was the facility to make it dramatic from the beginning. The questions leading up to a grand were kindergarten standard, with only the odd dense contestant falling victim, and it became a slightly pointless watch.

For all the drama of the Brough lady, I don't know if and when I'll watch it again. I hung around because of where she was from and then quickly began rooting for her big time because she managed to put on a show for the crowd while working through the questions. And there was real drama in her decision to choose Frog as an answer as soon as a question )"What kind of creature is a treecreeper?") came up, double checked with her son on the phone, and trusted his call when he said Bird. He was right, and he won his mum £50,000 in being so. Good on them all, though it's not as if Brough isn't already full of residents with that sort of cash - half of Hull City's first team squad lives round that way.
Authored by Matthew Rudd
Email ThisBlogThis!Share to TwitterShare to FacebookShare to Pinterest

It was HUGE! WE always watched, tried to get on it, never missed it, taped it, etc. Then when the first million was won it kind of lost its allure, especially when anyone else who did the same was in the papers that day, thereby ruining the surprise. There was no tension left. I haven't seen it in years and I find Chris Tarrant beyond annoying.