"They should have just written Beckinsale's part out..." 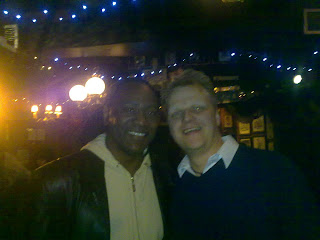 This was a pleasant bonus from last night's TV Cream Christmas shebang - a photograph with Reginald D Hunter, who happened to be in the same drinking boudoir as us.

Nights at the Phoenix Arts Bar in London with the Cream staffers are always a giggle, and the Christmas gathering brings out the non-locals like me. I was badly/effortlessly influenced by our pal Ian, who came down from Cheshire for the bash and promptly took over the unofficial but crucial post of best drinker within our group. I'm sure cardigan-clad Phil, author of a fine book about reading on the lavatory, is relieved (so to speak) to relinquish it after all this time. He needs to keep a clear head as he has an important assignment about Butterflies (as in Wendy Craig, shit cooking and wannabe lotharios in the park with discreet chauffeurs, as opposed to lepidoptery or nervousness in the stomach area) to upload to his blog before Christmas.

So we settled into our seats with ale and anecdotes while Louis gritted his teeth through another unoriginal observation about his likeness to 1975-stylee Graeme Garden and handed out signed copies of a book he wrote five years ago, drawn from a carrier bag. If you saw the British Comedy Awards at the weekend, this was sort of Harry Hill in reverse, really. Also a recipient of flattering lookalike comments was the marvellous Roman Empress, whose smart buzzcut and denim skirt convinced me that she should go blonde and start a new career as a Yazz tribute act. I am, however, unaware as to whether Yasmin herself has the Empress's remarkable capacity for Red Stripe.

The new job I start on January 4th received a surprising amount of attention, though this mainly consisted of Five Centres and others coming up with show features based on weak puns. Which, to be fair, is how the best radio mechanics are often thought up anyway. The alleged "highlight" of this Kronenbourg-aided brainstorming session was a feature showcasing the best looking women from my beloved home city and calling it "Hull's Belles". You see what these finest of media minds have done there? The fact that a) such a visual feature is not exactly compatible with radio, and b) the new show is not in Hull, did not discourage them from declaring the idea a surefire winner and toasting their creativity. I'll forward it to Paul Foster at Viking and see how quickly he deletes the email.

The next brainstorm involved everyone, as a debate began on the best comedy programmes that have never, to our collective knowledge, been committed to DVD. From initially sensible suggestions like Dear John and The Mary Whitehouse Experience, we soon veered into the less fondly remembered vault of laughmakers and the likes of Miss Jones And Son, Men Of The World and, brilliantly, Full House were thrown into the cauldron. The latter's suggestion prompted a ten minute collective rant about why Chistopher Strauli should have stayed away from the Rising Damp movie and then how a fresh-faced, youthful Steve Steen managed a full crediting in the Porridge film ("Belt up Atkinson you noisy scroate!") even though his character, Wellings, never said a damned word, although Fletcher did mention his name when reading the football team out to Grouty (which, by the way, appears to have 13 players in it before he gets to the substitutes. But anyway...).

Less hardy sitcoms like A Prince Among Men and Fresh Fields were also mentioned, although I seriously doubt that even society's ironic minority would exchange real money for a DVD of Julia McKenzie struggling with a cordless phone while Ann Beach hams up her annoying neighbour routine. The discussion ended with a welcome and impromptu humming of the theme tune to Three Up Two Down.

I stayed in a townhouse hotel in Bayswater, booked via lastminute.com for just 39 quid, half of what you'd expect to pay if you went to the Travelodge website and tapped in 'London'. Cheap, cheerless and complete with that must-have for all slightly seedy hotel rooms - a shower which produces only completely scalding water, irrespective of what you do with the taps. The "continental breakfast" was bread and jam. I don't think I've ever seen kippers on a continental breakfast menu in my life, despite what Fawlty Towers taught me. But yes, it was very cheap and you don't get what you don't pay for as a consequence. Devoid of sleep and entirely hungover, I ate two jammy breadrolls as a token gesture and then headed for the fresh air and the underground journey to Kings Cross. The new job will, assuming it's a success, preclude me from further Phoenix visits for the foreseeable future, so last night we made sure it was as worthwhile as possible. And so it came to pass.

I'm now away to read the book that Louis handed over. No, really. And here's how he signed it to me... 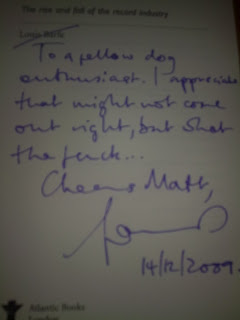 He is a gent. Who looks like Graeme Garden.
Authored by Matthew Rudd
Email ThisBlogThis!Share to TwitterShare to FacebookShare to Pinterest

*Very* disappointed you didn't mention 'Rudders at the Udders' - Matt Rudd visits a different dairy farmer every morning, plays a dedication then tries his hand at milking.

Anyway, great to see you...

And, look! I've signed your blog!

Is this Viking the famous York station?

Viking is in Hull, Suz. Hope you've learned the lyrics and moves to Stand Up For Your Love Rights.

Barfe, I didn't take any more pics. I couldn't be arsed.

What about the one of me and Ian sharing a joke?

I took lots of pics Louis, but didn't think folk would appreciate them being uploaded.

That was the only other one I took Louis, and Ian isn't keen on his photo appearing online.