"Don't those triangles smart a bit?" 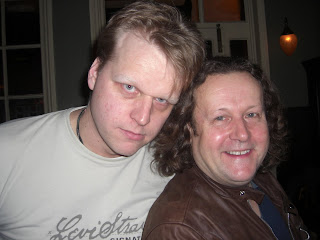 Alex and I, on the latest Nerd Night. Brighton was the latest venue to welcome a bunch of shouty radio people into its ample Friday night bosom. And this proved to be one of the most memorable.

My close friend Martin and I travelled down from Manchester via Virgin Trains. Two notable elements of the journey were the tropical temperatures of the train and the odd resemblence our train manager, or whatever blokes with flags and whistles call themselves these days, had to the great Arthur Mullard when he spoke. We found ourselves saying "Yus m'dear" during every pregnant pause and looking for Hylda Baker to perform a duet.

"God, London's a dump," said a text from our pal John from BBC Radio Tees (yes Londoners, that means Middlesbrough. John is hereby known as Mr Kettle) as he travelled separately to our coastal haven. A quick underground ride to London Bridge for our connecting train hooked us up with Callum, our longtime friend from the Imagine FM days and regular contributor to this blog, who now spends his working life observing Andrew Neil's syrup.

Callum, importantly, was our guide for the evening (along with the absentee help and recommendations of Blogsville's own ISBW, whom we thank dearly) and strode manfully ahead of us to the platform where, as the three of us nattered about any amount of meaningless trivia, we were heckled by a sinister dark voice. "Bloody Northerners, I hate them all," it said, among other less bloggable expletives. We turned round. It was Alex, in one of those cheapo furry hats you see advertised with matching gloves on the top of the pump as you deliver unleaded into your car. The straggly hair of the Dark Lord parading out of this piece of headgear made it look like a consolation prize from Beat The Teacher.

The journey to Brighton was most notable for Callum claiming proud responsibility for forcing Cheryl Cole, nee Tweedy, to change her mobile phone number. He had it from when she was still working her way through Popstars: The Rivals and he was on a Newcastle radio station. When a Sunday paper revealed details of her nightclub altercation that got her into a lot of trouble. Callum rang her that morning to ask her about it. "How man, fuck off like," was the agitated reply, and the number never worked again.

Towards the hotel we traversed, a Best Western on the seafront which was elegant and clean, with the only issue being the 45 degree angle at which the room I was allocated seemed to be set. Things slid down the chair and table and I would later find that sleeping on the higher side of the bed was nigh on impossible, with gravity and the muscle relaxtion associated with inebriated sleep sending me sliding downwards.

Anyway, into the hotel bar where the group began to gather together. The early part of the drinking involved my rather underwhelming tale of my third year class trying to translate the chorus of Caravan Of Love into German, having become over-confident in our ability due to knowing the German for "stand up". Not knowing the German word for "caravan" did prove an early sticking point, but Callum gamely gave it his best shot on our behalf and later confirmed it on Twitter.

After a few ales, we began the walk to the first pub of the night. The plan was to imbibe a little more liquor prior to our booking at Donatellos restaurant, described by ISBW as a "Brighton classic". Whether the conditions were also a "Brighton classic" is debatable, as it was chucking it down with rain and none of us were kitted out to keep it off. Callum, a Brighton boy but more than a decade out of the town, strode purposefully ahead of us as our guide and mentor for the evening but took a few wrong turnings. It felt like an edition of Knightmare, with the rest of us wearing a cheap metal helmet and taking constant turns and sidesteps back into places we'd already visited. All while getting wet.

Eventually, we made it to the Seven Stars, where we were greeted by an annoyingly dry Charles "Deputy Voice of the Balls" Nove, who had just arrived in his car and parked conveniently round the corner. Martin and John (note to self: find a radio person called Abraham to befriend for cheap photo opportunity purposes) had neglected to fasten their inadequare jackets during the downpour and were now sporting shirts with large rhombus-shaped wet patches down the chest. Such was the contrast in hue, it looked like they were wearing two separate garments, akin to Edward Catflap on Filthy Rich & Catflap, who wore braces and a string vest by day but had the middle part of a shirt velcroed on to his exposed chest whenever he needed to represent (ie, humiliate and beat up) Richie Rich in public.

We dried off, drank more and had restricted conversation, thanks predominantly to the outbreak of Talking Carl roulette that engulfed the table among the iPhone bores. Talking Carl, if you are not aware, is a programme which basically parrots back anything you say at it in a helium voice, so obviously the prank first heard in 1988 on GCSE Music-issue synthesisers was revived, as people said "Bollocks" into their phones and then split their sides when a Buggles backing singers version was shouted back by, er, Carl. These chaps also had the toilet roll game. I despair.

We then walked to the restaurant, again with a touch of difficulty as the compass within Callum's mighty brain suffered temporary malfunction. Finally we pitched up at Donatellos, where more of our bunch awaited. There ended up being 15 of us at the table and a top, top night was set to be had.

The food was superb and the usual array of anecdotes was swapped. Then one senior member of our group was asked about an ex-girlfriend of his, and specifically if he ever heard from her.

He was then asked if he still had her number. We were rather unprepared for the reply.

"Yes. I also still have the photograph of her with a Toblerone sticking out of her arse."

Restaurants are there to sell food to be consumed on the premises. At this exact point, and for a good half hour afterwards, no food was consumed. No-one was capable. People laughed until they feared for their lives, half-choking on whatever was semi-digested at the moment of impact. One lady was seen to immediately put down the spoon that had, seconds earlier, been the tool used to help her eat a delicious looking gateau. She eventually managed to eat it with help from a willing Callum.

The image prompted by this comment was at the forefront of everyone's thinking - and raging hysterics - for the rest of the evening. Fortunately, nobody was intrigued or aroused enough to ask to see the image, and the person who had ownership of the photo would have been way too much of a gentleman to show it anyway. The main question we asked of him was whether it was a standard, newsagent-style sized Toblerone or one of those the size and texture of a breezeblock that you can only buy at airports.

Eventually, he felt compelled to qualify his description. "It wasn't *right* in," he said, with appropriate (and impeccably timed) right-handed thrust gesture that just cracked us up even more. "It was more sort of 'balanced' on there."

Too late. He'd said it now. When someone asked if he had ever progressed to a Curly Wurly, they were given short shrift.

From the restaurant we found another pub - it was gone 1am and places kept chucking us out, but prior to the Bath Arms welcoming us with open, er, arms, we looked at getting into a rockist nightclub, the name of which escapes me. As we discussed among each other whether to go in, we noticed a handful of our group had vanished.

Ten minutes later they re-appeared from a 24-hour store, having bought 15 Toblerones, of 'normal' (ie, buttplug) size. God knows what the shopkeeper thought as this bunch of drunkard media types bought up most of his Toblerone stock. He probably suspected a certain hunger-inducing narcotic had been taken, especially as lots of childish chortling was going on too.

Anyway, a baffled doorman (is there any other kind?) was persuaded to take a group photo with everyone tooled up with a Toblerone. This photo is now on Facebook.

We swerved the club and enjoyed the hospitality of the Bath Arms, prior to a return to the hotel and an impromptu game of "just how dull about music can you be?" (a working title, but summing it up well) as Simon Hirst, the granite-stomached host of Galaxy breakfast in Leeds, ran through the song titles of a random Top 40 from any year and the rest of us shouted back the artists. Being the only one of these musos who remembered H20 and I Dream To Sleep gave me a brief swelling of pride that I hope never to be so shallow as to experience again.

A difficult sleep thanks to my body's natural desire to fall out of the diagonal bed followed, prior to an expensive breakfast and a cab ride to the station. An AC/DC T-shirt had been left in the cab, which Alex later told us we should have saved for him, even though there was no end to the possibilities as to the bodily fluids that could have been therein. On the train journey Martin and I nearly died of heat exhaustion thanks to Virgin again not choosing to maintain its air conditioning, and also left behind my scarf. I watched Hull City's game at Manchester United with a delayed hangover. Some of our players played like they had one too.

I think it's a return to Birmingham for us next, and heaven only knows which item of confectionery will be debated there for its 'alternative' uses, though as it's Brum, maybe it'll be a Kraft product-in-waiting. All I know is that I simply will not be able to look at a Toblerone in the same way again. 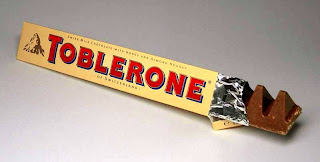 I spent a good 10 minutes laughing at a Toblerone in WHSmith, Reading Services at 2am! Great night!

Maybe you SHOULD have popped in to The Tank club, on reflection....

My excuses were that a) I haven't lived there for 11 years; b) it was dark and extremely wet; c) that part of town was built by mediaeval peasant fishermen. Milton Keynes it is bloody well not.

Not to worry, Cal. You were a tremendous guide. If a slightly wet one.