She was only nine, and the enormous tumour unearthed by an ultrasound the other day was found to be so complicatedly knotted to her stomach and intestines that it was impossible for the vet to do anything about it. The presence of blood clots meant that one act of bursting and she'd bleed internally to death, in agony, so we did the difficult but right thing. It didn't matter in the end if the tumour was benign or malignant, and indeed we didn't ask.

I've just removed her empty bed from the kennel where the other three Bassets are still waiting for the return of their comrade. They have seen Penny's lifeless, peaceful body in our hope that they will understand, somehow, that she has gone and won't be coming back, but I suspect it will be too much for them to comprehend. They will howl and bark for a while at all hours as they begin to miss her, but we'll never know if they grieve or not. But I am grieving. I burst into tears as I removed her bed. I slumped on to the kennel floor, head buried into Bentley's fur, with the big lad notably not wagging his tail as I hung on to him. This is as close, I think, as any of them will come to understanding what's happened. Dogs aren't daft, but some are dafter than others.

We got Penny from a private owner in 2001 when she was a year old. She'd been bought by them, as I've mentioned before, as they couldn't have children, then suddenly managed to conceive their wanted sproglet and Penny - or Pagan, as she was then (her kennel name was Malrich Devil In Disguise; she came from a litter named after Elvis Presley songs) - was suddenly unwanted, confined to a cage in the kitchen. Keeping any dog in a cage is obscene. There is no evidence she was mistreated but certainly she was neglected and it's a blessing that her owners placed an ad that appeared in our local paper on the day we chose to find a Basset. Pagan didn't suit her so we chose a more appropriately girly name

She settled in immediately, initially having a free run in the house as there was only her and Twizz, our aged cat who passed away last summer. They made a point of ignoring each other, though Penny knew she was last into the house and therefore that Twizz had the final word in the event of conflict. With her came her breeding papers and so we began our sojourn into Bassetland.

Penny was a stroppy madam, a drama queen and a right snob too. We wouldn't have had her any other way. She refused to take a crap in public, preferring instead to do it quietly in the darkest corner of the enclosed dog run that she and the others used for exercise and ablution. How fantastic is that, even allowing for the slightly tasteless subject matter? She was aware that being caught short was private and therefore chose to demand her privacy. Bentley, on the other hand, once shat on my parents' hearth rug, so she wasn't entirely influential in her ways.

Yet top dog she was, without question, even when boisterous Boris arrived. He is the youngest of the pack, the last to arrive, and immediately tried a canine coup which partially worked until Penny bared her teeth at this upstart pup and he cowered into a metaphorical corner. He subsequently started a thousand fights with Bentley and Ruby and not one with Penny. She ruled.

Her best skill was her way of mediating when other dogs came on the scene. Boris isn't a fan of rogue dogs on his territory and wants to bark and confront them. If that dog is loose, then it may get a shock if it is allowed to approach Boris. So, Penny would be off her lead and instantly she'd scamper up to the dog, introduce herself and give the owner time to catch up with their pet by discussing whether Wagg or Beta was best. She didn't dislike anyone or anything, although her almighty ten-second howl, a noise you had to hear to believe, was like a burglar alarm in the way it warned people walking into the garden with innocent intentions - such as the window cleaner, particularly - made sure she was taken seriously. From behind that fence, the howl could have been any breed of vicious creature, not a dopey Basset with a tail like a walking stick and a penchant for rolling on her back.

Penny was nine years old, and would have reached double figures in September this year. Bassets are prone to illness in earlier life, unlike other breeds for whom not reaching the age of 11 or 12 is unusual, but she hadn't had a single unwell day up to the point when, just after Christmas, I noticed she seemed to have put on some weight.

A closer look determined that it wasn't the belly of a glutton, but it was a growing belly nonetheless, similar to how a pregnant animal would appear. She groaned and complained when the growth was pressed and so we knew that there was a problem.

The ultrasound at the start of the week revealed a tumour; today's exploratory operation revealed the extent of it. We'd been told it was most likely to be attached either to her spleen or her liver; the former was operable as dogs can survive without a spleen, the latter not so. As it turned out, neither was the case, but it was still a no-hoper for her, poor thing.

And then there were three. Plus the cats, of course. We buy into the knowledge that our pets will die before our eyes each time we bring one home, but that doesn't make it any easier when it happens, and the mawkish but clear truth is that it will happen several more times over the next few years, as the other dogs are eight, eight and six years old. Penny was our first Basset, the one that confirmed our interest and love for a terrific breed, and we will miss her forever and ever. The memories of her will never cloud. They never do when they represent someone who melted your heart every time you looked at her.

When we knew that the end could be near, we got the camera out and took a stack of photos. This is the last pic of Penny and I. 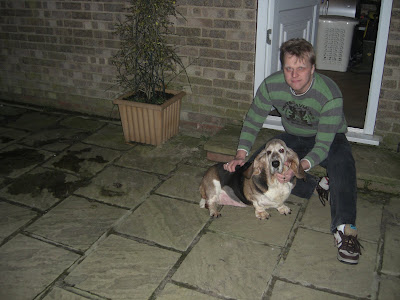 I am sitting here, sobbing quietly, and I never knew her. I can't begin to think how you're feeling.

Matt, I'm so sorry to hear this.

Mathew, I don't have the words.

I'm so sorry about your dog. We lost ours at the August Bank Holiday last year. He also had a tumour in his stomach, which was inoperable. We have a superb vet who kept him comfortable, but he became tired and we helped him pass at the August Bank Holiday. It was right, the kindest thing to do - I know that - but I want my dog back. I send my condolences to you and your wife.

Matt,
So sorry to hear this. Your post reminded me of my first dog Teaser, who I'd grown up with all my life, and sitting with him on the steps knowing he wasn't long for this world. All we can be happy for is that they were spared from pain and that we had the opportunity to say a proper goodbye.
I'm sure Penny experienced so many years of joy with you as you did with her.

So sorry Matt. Pets are not pets, they're family. I know what you're going through and I'm thinking of you.

How did I miss this article? Incredibly well written, Whatever problems you are having at present, good luck with them all, and hope to see you blogging again - writing like that deserves an audience.

Oh Matthew, I'm sorry. Beautifully written and heartfelt. Sounds like you feel the same way about your Bassett as I do about mine. x x x x