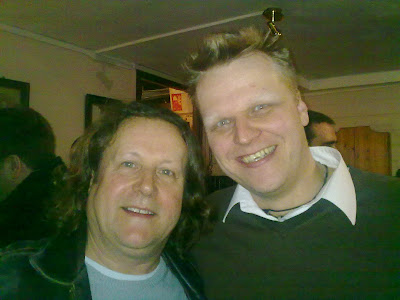 Alex and I on the latest Nerd Night. A pleasingly sizeable number of radio professionals with little regard for their own self-awareness dropped themselves on Birmingham for another smashing night of scoff and quaff.

The hotel the non-locals had booked was a cracker - £34 quid including breakfast when confirmed via a well-known discount website - although it did seem that no taxi driver in Birmingham knew where it was and appeared to drop each member of our entourage off by accident. One by one we gathered in the bar area for ale and catch-ups ("so, how's the fab new job going? Oh, sorry to hear that...") prior to more taxis picking us up for an eight o'clock restaurant booking.

Our guide, the fragrant and generally marvellous ex-Radio 1 jock Charlie Jordan, had chosen an eaterie entitled Around The World In 80 Dishes. This, if you aren't aware, is an all you can eat joint with grub of the Indian, Thai, Mexican and Italian persuasion. The food was so good - and at 15 quid a pop, tremendous value - that even the achingly sophisticated James Walshe, who runs a Birmingham rock music station and claims he wears out his underpants too quickly, was prompted to withdraw his previous complaint that this restaurant's location on Broad Street meant we would be overrun by "Brummie chavs".

Dishes were filled, cleared and then quickly removed by rather eager staff in order for us to just recamp to the buffet and go at it again and again. I always wonder if, like the casino attitude to professional gamblers, whether all you can eat establishments keep an eagle eye on people whose constitutions are evidently capable of clearing every item on offer several times, and issue life bans to such folk if they are spotted consuming, say, six separate platefuls. Fortunately for us the food was superb, and fortunately for them, the food was filling. I managed three platefuls and eschewed the thought of pudding, despite the seemingly endless range of fruit-based dishes and baked goods on a side trolley.

The only gripe, aside from the Becks lager being a dodgy batch and everyone demanding replacement Stellas, was that a 42 quid service charge was added to the final bill. The waitress made it clear this was discretionary and the immediate response from us all, showing levels of skinflintery that would make Arkwright p-p-proud, was not to pay it. Before you issue accusations of ingratitude, I should add that at an all you can eat buffet, the level of service is certainly rather limited. They show you where you're seating, bring drinks and do a bit of pointing. Otherwise, they just wander and observe. Their decision to take away plates the moment cutlery was set down was entirely theirs, as I for one would have happily used the same plate all the way through.

They also charged for the seven pints of off-taste Becks. This, after a mild protest, was axed from the bill also and so a nice, round 60 quid was shaved off. People ended up with a very large meal and a good few ales and paid just 20 quid each. Bargain.

I used to work on Broad Street, at 100.7 Heart FM which was a short walk from the restaurant. The station's main competitor in Birmingham, heritage station BRMB, was directly above (or below, can't remember) the restaurant. I never knew this. Therefore I spent a year of my career driving along a deserted Broad Street without ever noticing that the biggest rivals of the station I worked for were on my journey and, given that I worked nightshifts, the muted concentration requirements of drivers on Broad Street at 1.30am on weekdays meant I had every opportunity to see them. And I never did. Nor did I ever know. That could be me being blind, or it could be them being poorly branded. You choose. But being in Birmingham did remind me of how much I enjoyed working there.

From the restaurant it was a quick amble to a side street and the Tap & Spile, which seemed to be the only pub in the area that satisfied our requirements of being spacious, supplied plentifully with seating and not infected with music so loud that you had to shout down one another's earholes. We ended up staying here for hours, so good was it. A few further radio types from the area joined us at this point and much gossip and slander was to be had.

The Tap & Spile is on the canalside in Birmingham and has a rather narrow and sheer walkway with no protection from the water which means, in theory at least, it is as easy as pie for one berk to get drunk and fall in or, more worryingly, one berk to get drunk and push someone else in. The doormen at this place really earn their money as aside from keeping the bar hatch clear and vigilantly eking out daft people, they have to regularly stop altercations or inebriated dares for fear that someone will fall canalwards. Indeed, one person was seen removing all of his clothes as if intending to take the plunge but, as he was contemplating doing the full Perrin and getting his kex off too, a doorman politely ushered him back to the warm and dry.

We left there at 1.30pm after being told that (and I quote) "Birmingham's wankers" tend to come in thereafter once the more tacky bars and spots have closed their doors. Cabs were hailed and it was back to the hotel where, I had been reassured, guests were entitled to "lounge service" - ie, room service in the lobby area. once the bar was closed.

It quickly became obvious that the hotel had this policy for lounge service in theory only, and either never or rarely experienced an impertinent guest actually demanding the usage thereof. Here Alex was our hero, truthfully pointing out that the lounge service was, in fact, the reason more than ten of us had booked into the hotel in the first place. We were told, after a quick conflab behind a closed reception door, that only bottled ales and soft drinks were available as the bar was closed not just for service but also for access, and so a rather put-upon night steward took our orders and returned with a trayful of drinks. Our friend Simon, a bullish Mancunian, arrived a little after we had settled down with the drinks and, unable to find the steward, managed to corpse all of us by calling for lounge service with a loud whistle normally reserved for competitors on One Man & His Dog. It worked.

The highlight of the final hour or so before beds beckoned was Alex informing us of someone he once knew that owned a parrot fluent in Yiddish.

So, another night of networking and bitching is complete, and they remain all the fun in the world. They also, within the industry, seem to be catching on. Wonder what Liverpool will have in store for us in June?
Authored by Matthew Rudd
Email ThisBlogThis!Share to TwitterShare to FacebookShare to Pinterest