"Can you empty the ashtray?" 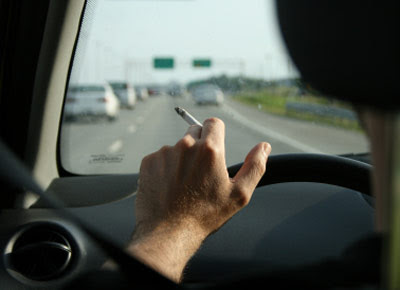 Bill Hicks would have had a field day with this. "I can't kill anyone in a car because I'm smoking a cigarette - and I've tried. Turn all the lights off and rush them, but they always see the glow..."

Having banned smoking in all public places, now the Government is being urged by the medical profession to ban smoking in cars. This is to protect children from passive smoking within a confined space.

Have these people never heard of a contraption called a window? They're great. They're pieces of toughened glass that allow you to see what's going on outside. Even more impressively, there is a button underneath it - or, in older vehicles, a windy knob thing - that allows you to open the window and let in fresh air.

For generations, adults who light up in cars have wound down windows to let the smoke from both fag and lungs escape and thereby not stink out the interior of the car too much. And, as unsophisticated as it sounds, it tends to work really rather well.

Smoking in cars is potentially more dangerous for the driver alone, who has to control the wheel and other buttons and levers while with a tab on. When I smoked and drove, I found it made no difference to my ability to hold a steering wheel properly, and the removal of one hand to put the cigarette between your lips was no different to using a hand to stifle a cough or do the considerate wave at another driver who has just let you through. The only time you got into a slight panic was if you accidentally dropped the fag. Oooh, fun and games then, believe me.

But the medical people have no apparent agenda to stop drivers smoking for the benefit of the immediate safety of everyone in the car. That doesn't sound like priorities to me. It just sounds like another way of bashing smokers for daring to take up a legal habit that raises a fortune for the Government.

Cars are private spaces and very well ventilated and it's nobody's business to tell anyone within one whether they can enjoy a quick drag or not. Presumably, were this proposal to become law, the car industry would get uppity about having to change their meticulous interior design in order to remove the now highly-illegal ashtrays.

Just as with the smoking ban in pubs, which has ruined the pub industry more than any other single thing, the medical lunatics are dictating to our lawmakers what is best for people, rather than letting us live our lives. The best irony of all this is that as ex-medical students, these doctors aren't exactly averse to 20 Embassy a day.
Authored by Matthew Rudd
Email ThisBlogThis!Share to TwitterShare to FacebookShare to Pinterest

I still think there should be some sort of award for the woman who I saw near here one morning, driving a manual transmission Golf, talking on the hand-held mobile and smoking while negotiating a dogleg manoeuvre across a busy junction in the morning rush-hour. She even managed to indicate and everything. Multi-tasking of the highest order.

As for the ban, I hate the idea of yet another bit of nanny state interference, but I do find myself swithering when I see a school-run car on a winter's morning, windows closed, small kids in the back, driver puffing away. But I'd do them under Child Protection laws, rather than any motoring provision.

I don't have children. But does that mean I still can't smoke in my own car?

I expect there are planty of people who would ban smoking outright in vehicles, F-C, kids or no kids.