There were three in the bed and the little one said... 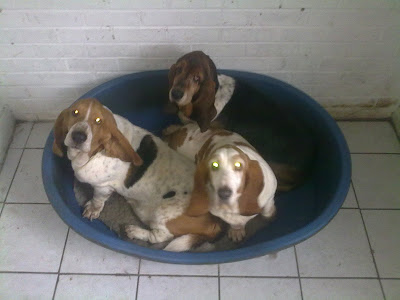 And so there were three. It's five weeks since Penny died, and the remaining trio are doing just fine again, I'm pleased to say. They did mourn their leader and matriarch for a short while, but it was more of a confusion over her absence rather than three aching canine hearts.

This photo was taken the day after Penny died. It's a good photo because it shows that Boris, on the left, and Bentley, at the back, needed the others around them. It's the Basset double bed which was the domain of Ruby, at the front, and Boris.

Bear with me on this. Now, Ruby and Boris shared this bed, while Penny and Bentley each had their own single bed. Penny and Bentley, however, both wanted snuggle time with the popular Ruby and so one or the other would frequently climb into this bed if Ruby ever happened to be in it alone. This would lead to Boris barking the street down until someone - ie, me - went into the kennel to remove the interloper and allow Boris back in. Penny, for all her bossy qualities, would rarely try to get into the bed if Ruby and Boris were both in it, while Bentley's status as the wussiest dog on earth meant there was zero chance of him ever trying.

And then Penny died.

This photo was taken the next day when I walked into the kennel to check on them and Bentley, before my eyes, climbed right past Boris to join them in the bed. Boris did not try to growl or snap Bentley away, and Bentley himself showed unusual courage to clamber clumsily through the other two. They stayed in this huddle all night; I could tell from the unaltered state of the solitary single bed still in the kennel the next morning.

It soon reverted to type, and now Bentley has his single bed while Boris and Ruby share the bigger one. Any intrusion by Bentley is greeted by Boris barking at him loudly until a human intervenes. They've got used to Penny's departure in other ways; Boris, after wolfing down his own meal, would always head to Penny's eating corner to check for anything she may have missed. He did this for a few days before eventually realising she was no longer there and, after looking at me slightly baffled, just stopped.

Penny's demise has also, oddly, led to fewer accidents in the kennel, fewer scraps and fewer 6.30am singalong starts (the noise of three hounds howling through a baby monitor next to your bed is more powerful a rouser than an alarm clock placed inside a biscuit tin). It seems that they have responded to the lack of leadership by, well, growing up a bit by themselves. Bless them for that.

We miss Penny dearly. But the attitude of the other three, who are pack animals and therefore deeply protective of their kind, has really helped us too. Bizarre? Perhaps. But it doesn't stop me being proud of them.
Authored by Matthew Rudd
Email ThisBlogThis!Share to TwitterShare to FacebookShare to Pinterest

I love your dogs. I'm glad they're back on track

Aw, that picture...I'm a cynical old trout, but it melted my heart.