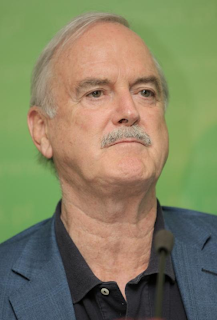 John Cleese is going on a speaking tour, according to today's news. Get me there.

I know he gets stick these days for his criticisms of the UK and his rather eventful marital history, not to mention some dodgy film roles and political endorsements, but I don't care about any of those. If this tour consists of a two-hour show that allows him to tell the best stories and anecdotes from his working life then I'm sold. Front row for me, please.

There are loads of (sorry for use of this expression) national treasures who I could just sit down and listen to yarn away about their lives for hours on end. Cleese is one. Now that he's back in Government, we may have to wait a while for the Kenneth Clarke speaking tour but it'll be fascinating when it happens. I'd love to hear the stories of Barry Cryer, Geoffrey Boycott, Terry Wogan, Ranulph Fiennes, Steve Davis, Bruce Forsyth, Jimmy Greaves, Stephen Fry and David Dimbleby. Tony Benn went out on tour a year or two back and I missed it, but I'd love to hear about his stories from Attlee via Wilson to Blair.

Lots of ageing people of a certain profile do the after-dinner speaking bit, especially among sports stars, but a full-scale tour would be a really good test of just how interesting their lives had been. I'm in no doubt Cleese would fill each of his eight scheduled venues several times over. In fact, I'd rather hope that his example will be followed by some of his contemporaries - get me to the Graeme Garden lecture immediately!

I so wish someone would put the full eulogy from Cleese online, rather than just the first section, but nonetheless it's still worth seeing.

Maybe a little puerile of me, but one story I'd love to hear from Cleese would be more on him being the first person to say "shit" on British television. He mentions it in the wonderful Graham Chapman eulogy, but I've never actually found out on which programme he uttered it. Everyone (well, anyone who cares) knows the full story of Kenneth Tynan, Felix Dennis and the Sex Pistols' sweary outbursts, but I've never seem Cleese's landmark cuss covered at all.