Not done this for a bit but I feel obliged to fill the page with something new. So, it's out with the iPod (which, for some reason, won't turn off at the moment) and on with the shuffle function. And...

1: The Sound Of The Crowd - Human League
"Make a shroud pulling combs through a ... backwash frame!" Stripped bare electronic nonsense from a band everyone felt they were discovering for the first time. A whole verse about applying make-up should always be cherished. Susanne and Joanne's vowels had reassuring Grenoside flatness that they'd never quite shift, and more power to their elbow for that.

2: Fragile - Sting
"On and on the rain will fall, like tears from a star..." Look, there's a lot about Sting I can't abide, but sometimes one can't help oneself.

3: Killer - Adamski
"If we try to live your life - the way you wanna!" Put a quick straw poll together of the best No.1 singles of the 1990s and this will be high up, despite George Michael's bandwagonning "mashup" with the Temptations. Adamski was soon cast aside as a fad who had one new bleeping noise on his synth but Seal, controversially uncredited, went on to win every award going and was introduced by an exhausted Brian May as "Mr Seal!" at the Freddie Mercury Tribute Concert. And the strife this causes at "title and artist, please" pop quizzes, oh my... 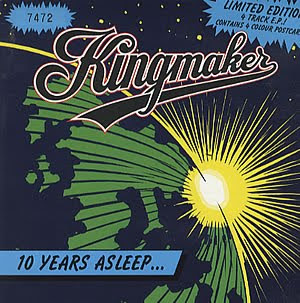 4: Ten Years Asleep - Kingmaker
"All the punks are pushing thirty years and are hardly feared..." Every mention of Nick Clegg for four days made me think of this band. I think they were one of the top three bands from Hull that surpassed the Housemartins, according to Paul Heaton's bon mot. Matters not. Raucous, slapdash song which I felt obliged to buy for reasons of comradeship. The breakfast television and 0898 references give you an idea of the era, really.

Sting, eh? Go on, I can take it...
Authored by Matthew Rudd
Email ThisBlogThis!Share to TwitterShare to FacebookShare to Pinterest

Nothing wrong with a bit of Sting in moderation.

You haven't seen what mine will bring up:

That's an excellent five there. Kingmaker were my favourite band during my last year at college - at one gig the ceiling was brought down by enthusiastic crowd pyramids.

A random selection from my mp3 player would give chunks of audio books as I don't listen to anything else on the move.

Billy Idol, huh? When he left Gen X he was like a cat who'd just come back from the Vet, minus his tackle: he looked the same but his spunk had gone. I covered him for the paper a few years back and it was like watching a tribute act. Shame, as Generation X used to hit the spot for me every time; still do, in fact, in moments of weakness.
Right, let's see what my shuffle does:
1. The Sweet: New York Connection
2. Macca : Junk
3. Sterling Void: It's Alright - some dance thing, apparently.
4. Vernon Elliott: Pogles soundtrack
5. Noel Gallagher: Fade Away

Funny you should mention that Kingmaker song - it was in the chart exactly 17 years ago, which I know because in between my deciding to post a chart of that era on Usenet and actually doing so, I heard the record for the first time on Pick Of The Pops. And quite liked it, actually.

Is it me or do they sing "arse around" on Sound Of The Crowd?

Right...here's what mine brought up..

The Look - I Am The Beat