Argentina versus Greece is on, and the bearded, suited Diego Armando Maradona is looking proud as his country's national anthem is played. He always reminds me of Princess Alexandra.

This isn't a slight on HRH, who is the Queen's cousin. I'm not suggesting she has a crack addiction nor has held a riotous press conference in which she told the journalists, in slightly more indelicate terms, to perform an oral act upon her. But when I think of Maradona's most notorious moment, I think of her.

You're demanding an explanation. And even if you're not and are about to click the link to someone else's blog, you're still going to get one.

Maradona's act of cheating ("And is that goal going to be allowed?") that made him even more of a hero to Argentinians and a brand new one to Scots, followed by his stunning solo second ("You have to say that's magnificent!"), knocked England out of the 1986 World Cup in Mexico at the quarter final stage. But eleven days before, crucially, our village community centre was reopened after a major refurbishment.

And the lady who opened it? HRH Princess Alexandra. As I recall, she is the daughter of Prince George, the youngest brother of George VI (no misprint, as George wasn't the King's real first name) who never really established his role in life and copped it in a plane crash during the war. There was a documentary about him on Channel 4 not long back. Her brothers are the Kent pairing that we know quite well, Duke of and Prince Michael of. 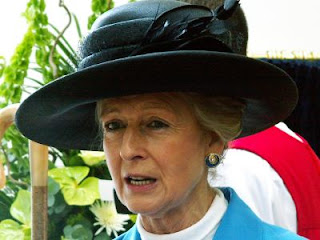 And here's the modern day Maradona... 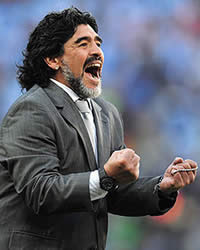 You can't see the likeness? Bah.

By the way, my single favourite tweet of the World Cup so far was the one that suggested Maradona, in his suit and with his greying beard and ample jewellery, looked like a bloke from the waltzers making a court appearance.

I'm procrastinating, I know. As the 1986 World Cup was in Mexico, and the games were played in woefully inhuman Central American daytime temperatures, they were on late night in the UK or even in the middle of the night. This was no good to football-daft schoolboys like me, and so I only ever got the results upon switching on Frank Bough while packing my Nike shoebag in a morning. The last group game, which England needed to win after a desperate start to the competition (sound familiar?), was against Poland and was, of course, in the middle of the night.

So, we all woke up to the good news that England had located their own arses and managed to reach the second round of the competition. As every kid walked through our village to get to school - the comprehensive I attended was one village away - much excitement was to be had. The community centre was reopening at lunchtime by royal appointment and preparations were being briskly made. Hanging baskets were being watered, with the dead ones finally being removed, while decorative stuff was draped and hung and taped and laid. TV cameras were even there, which I'd never seen in the village before.

So, school happened and then the walk home, by which time Her Royal Anonymousness had turned up, unveiled the plaque to the newly-named Alexandra Hall, smiled for the Holderness Gazette and then buggered off again. I doubt she had time for a pint in the Queens Head, possibly because of the awkward name of the pub, which was handily situated across the arcade from the community centre. When we arrived back in our village, it was still swathed in ribbons and paper chains and bunting that hadn't been out of the town council's cellar since the Silver Jubilee, and some roads were still closed to mechanically-propelled vehicles.

And one rather thick acquaintance of my brother, upon seeing the bunting, commented: "Oh, they've really celebrated the England result, haven't they?"

So that's why Diego Maradona reminds me of Princess Alexandra.

(This is quite a story, isn't it? Bet you're biting your fist.)

She visited after the Poland game, and we didn't play Argentina for another 11 days, but he is the playing symbol of the whole competition and so when I see him, I think of the 1986 World Cup, and in turn that makes me think of Princess Alexandra. I would say I always think of Maradona when I see Princess Alexandra, but I haven't seen her in any form since, or at least not to my knowledge. No solemn broadcaster has, from memory, pointed her out at any Royal wedding or internment that the television has shown and she has presumably attended. She is still alive though. I've checked. I don't think royalty has crossed the village boundaries since. The community hall that bears her name was the venue for every crucial teenage disco I attended over the next two or three years.

The friend of my brother who seriously believed that a village's precious bunting would be hastily hung up to celebrate a single England football win of limited significance is, you'd be reassured to learn, now a policeman.

As you were.
Authored by Matthew Rudd
Email ThisBlogThis!Share to TwitterShare to FacebookShare to Pinterest

That's like one of my posts. Referencing minor royalty with a roundabout connection to something. I applaud you.