"And England sad-sad-sadly are out!"

I never buy a Sunday newspaper, but I intend to avoid them with even more care than usual tomorrow. I dread to think what some of the lower quality journals have in mind in previewing the England v Germany game.

I do hope, at last, that the harking back to two world wars has finally ended as Fleet Street policy whenever the two football teams meet in major competition. The unspeakably tasteless front page of the Daily Mirror - allegedly a forgiving newspaper - on the day of the 1996 European Championship semi-final took jingoistic claptrap to a level lower than a snake's belly. 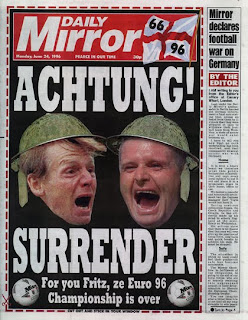 Piers Morgan was the editor, lest we forget.

The fact is, however, that there is a major hang-up over the German football team and it is easy to see why. Since the 1966 World Cup final against the then West Germany (that's the one we won, for the many non-footballists who still plough through this guff of mine daily, and bless you for that) we have never bettered the Germans in either of the major international competitions. 1966 represents the last time England knocked Germany out of a major competition (assuming the final can be regarded as an act of "knocking out").

In 1970, they gained revenge at the next World Cup by defeating us in the quarter finals. In 1972, they won a two-legged European Championship quarter final, the first of which was a fine 3-1 win at Wembley. In 1982, we garnered a goalless draw in the World Cup's much criticised "second phase" (which was dumped afterwards) and the Germans progressed while England flew home. In 1990, there was the notorious semi-final defeat on penalties in the World Cup. In 1996, another semi-final defeat on penalties before the Wembley crowd in the European Championships. In 2000, we beat them 1-0 - our first competitive win since 1966 - in the European Championships but neither side qualified from the group. Later the same year, Germany won 1-0 in the old Wembley's final ever game as World Cup qualification got off to a bad start. The incredible 5-1 win in the return fixture at Munich's Olympic Stadium is tempered, albeit mildly, by the fact that the Germans not only still qualified for the finals behind us, but went on to finish as runners-up while we did our usual quarter final choking act. We have made no finals since 1966; the Germans have won two World Cups and two European Championships since that day, and England were among their victims on three of those four routes to glory.

So, as you can see, the history is backed by a dismal record, one which comes along with a fattening dollop of inferiority that acts as enough reason to feel nervous about tomorrow's game. Referring back to 1966 becomes more understandable when you examine the subsequent progress of the fixture. Referring back to 1918 or 1945 is not understandable, nor acceptable under any circumstance at all.

And I have never disliked the German football team, despite their uncharitable habit of beating us in matches that act as a do or die for the England team. The two wins in 2000 were not such, the rest quoted above were. The other big rivalry England claims in world football is that of Argentina, but it exists purely because of one act of cheating by one player which, as the most famous single moment against the spirit of the game (not to mention the rules), still rightly rankles.

With Germany it's envy, and that isn't mutual, plus respect, which is. With Argentina it's hate, and it's most definitely mutual. The reason Diego Maradona never came to play for an English club wasn't because of money or the post-Heysel European ban. It was because he would have had to live essentially under house arrest as a whole generation of English football fans hated him.

If we do beat Germany tomorrow, it's likely to be Argentina in the quarter finals. Now that really is when the tabloids will go stir crazy. And if that day comes, I might even buy one. Well, read one in the shop, at least...
Authored by Matthew Rudd
Email ThisBlogThis!Share to TwitterShare to FacebookShare to Pinterest

The economic climate (ie, the whole country's feeling a bit ground-down and second-rate) has provided a perfect emotional springboard for a good old-fashioned bout of focused national hatred. We're feeling shit about ourselves, and we need someone to turn it all out on. Enter the Krauts, and if we're really lucky, the greasy Dagoes. It's going to be like Orwell's Three Minute Hate, spread out over days or weeks.