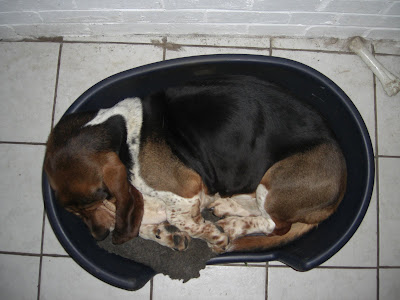 Unfortunately, pet insurance doesn't cover dental treatment and therefore we're paying through the nose - or through the mouth, if you prefer - for the removal of Bentley's remaining rotten molars. However, to have my big boy Basset free of infection, even for him to endure a diet of soaked biscuits and rice pudding, will be very much worth it.
Authored by Matthew Rudd
Email ThisBlogThis!Share to TwitterShare to FacebookShare to Pinterest

Oh my word, poor Bentley. I suppose doggy dentures have yet to be perfected. I hope he makes a good recovery.