I would blog about the World Cup, but frankly I don't hold an opinion that hasn't already been expressed by anyone else. The vuvuzelas are really irritating, England always start slowly and then improve, and it shouldn't matter a jot whether Adrian Chiles wears a tie or not.

However, a key and unique moment did occur on Sunday night for a downtrodden, minority sector of the football loving society, of which I am a proud part. We call ourselves "Hull City supporters" and a long-hated club millstone was removed from its neck when Germany played Australia.

I shall explain. Let me introduce you to Richard Garcia.

Garcia played for Australia in the match, and played quite well too, as well as the context of a one-sided win for the Germans can allow. He has also had three seasons in the amber and black of Hull City and was on the right hand side of our midfield when we won promotion at Wembley. 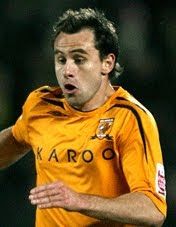 He is the first serving Hull City player to take part in the World Cup finals*. We haven't even had a squad player, for any country, before, never mind one who actually got proper time on the field. Plenty have joined us after a World Cup (two rather gifted Jamaicans from the 1998 tournament leap to mind) and we've had a few old stagers whose next move after their athleticism has gone was to take a few quid off the Tigers for a year or two. But Garcia is the first player ever to be on our books at the time of his appearance. And we can be further grateful to him for surviving the cut as we also had hopes for our resident Nigerian and Algerian players to be in South Africa, but both got Walcotted from their squads at the last minute. We could have had up to four Irish internationals there too but for a spot of French unfair play...

It really is a great moment for us. The club call it "history" on its official website and while, to me, that word overstates it a tad, it is an understandable sentiment. We were a club of real featurelessness until lately - everyone knew that wretched stat about being Europe's biggest city never to have a top-tier club which finally went, for good, in 2008 - but now we're slowly chalking off bits of our underachievement. This latest one to bite the dust is all thanks to a squeaky-voiced Aussie who hasn't actually played very well for a year.

Now, about that stat of being the first Hull City player to score at a World Cup finals, Rich...

*Jozy Altidore isn't ours and never was. He was on loan.
Authored by Matthew Rudd
Email ThisBlogThis!Share to TwitterShare to FacebookShare to Pinterest