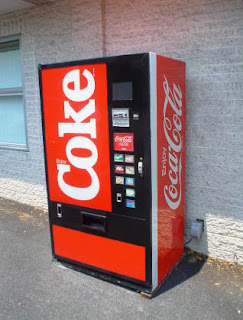 "You may as well buy a bag of sugar!" said my college colleague Jim Leffman, sometime in 1992. I have him to thank for not buying a can or bottle of Coca Cola ever since.

The stuff still sells well, of course, but there has been an element of "danger" for a while now about purchasing Coke rather than its white-canned, dietary alternative, and I'm assuming that it's kids who still prefer the Capstan full-strength version. Certainly most adults I have seen quaffing this most recognisable of vegetable extracted drinks choose the Silk Cut alternative. And none of them are ever on a diet. I always laugh when, having been forced into a branch of McDonalds, I see teenage girls ordering Diet Coke for health reasons - while also eating a Big Mac and large fries.

I can't say, of course, that I've never drunk it since Jim's words of wisdom, which were uttered in the Darlington sunshine as I and two other pals returned with a bit of lunch to a patch of grass where Jim was reclined, awaiting us. I went through a phase of drinking Bacardi and Coke (as the option for when the belly was saying "no more beer, ta") on nights out, and not once did I ask for the diet option. The taste of Bacardi tends to obliterate any evidence of saccharin, anyway.

The strength of the brand (and the fact that all rival colas, including Pepsi, have always tasted appalling by comparison) means that Coke will always survive, irrespective of its lack of conduciveness to a healthy lifestyle. All things in moderation, and so on. But that brand strength has always been maintained by some truly memorable advertising campaigns.

There was the I'd Like To Teach The World To Sing effort from the 1970s, the first of quite a few ads designed to show that Coke transcends political struggles and international grievances, and can be enjoyed by anyone, anywhere. My particular school era recalls First Time rather well, with that slightly sick-making school dance cobblers advert set to the warbles of Robin Beck who promptly took the de-Coked version to No.1 in loads of places and then disappeared. That advert irks me still now, as no teenage girl ever just goes all quivery and giggly and says "yes" when a suspiciously-ginger bloke in a white jacket asks her to dance. They laugh at you, swear profusely in your direction and then dance with someone taller who can illegally access an uninsured moped at a moment's notice.

I did like the 1990s ad of the bloke singing along to his Walkman (a la Eddie Murphy doing Roxanne, only more tunefully) and ended with the line "always Coca Cola" as he spots the girl in a nearby seat swigging from a bottle. And I have faint memories of an ad from the late 1970s of a young boy carrying one of those glass two-litre bottles (15p return) and offering it to a boxer (?) who, after initially declining, drinks the whole thing in one (which is impossible, frankly). I'm sure Cadbury's ripped off that ad for a Mini Roll commercial a few years later.

Diet Coke brings to mind three ads; Elton John's pointless roustabout on the piano (around the same time he did identical ads for Cadbury's chocolate); the one-fortnight-per-summer "Just for the
Authored by Matthew Rudd
Email ThisBlogThis!Share to TwitterShare to FacebookShare to Pinterest

Coca-Cola used to contain cocaine - that's where the "Coca" bit comes from. So those cocaine t-shirts were closer than you think.

Flat "full fat" Coke is a regular for all open water swimmers (hubby is a triathlete) to drink after a swim. it's good for nuking bacteria apparently. It's also good for dissolving teeth and bringing the shine back on copper coins, should that sort of thing be your bag.
I'm a Coke Zero girl myself, not that I even drink that very often.
My favourite soft drink adverts have to be the relatively recent Sprite ones with the "creature" in them, particularly the ones where he is dispensed from a vending machine and samples chilli sauce.

Personally, I always preferred Pepsi adverts - not quite so Disneyfied or All-American.

I realised one day when I was fifteen that full-on Coke tasted like washing up liquid, and have never touched the stuff since. I think I'd be sick.

But I do like the odd vodka with Diet Coke. Diet drinks have come a long way in flavour since the asparatme-laced days of Tab and Fresca, but I'm still pretty sure they're not too good for you.

Still a full-fat coke boy myself. I've tried the diet options for pretty much every soft drink on offer, but find the sweeteners don't agree with me. Not so much the change in flavour, but the fact that I still feel thirsty after drinking them. Which is a problem in my book.

I quite liked the "secret world inside the vending machine" adverts recently, but can't stand the Christmas ones.

Full fat all the way for me. I don't buy it often because if it's in the fridge I have to drink it. I could quite easily end up like Christina Onnassis (there's one for the teenagers).
"You may as well buy a bag of sugar", I'd have replied "And your point is? Danger's my mifddle name".
Can't stand the diet stuff.