Take a look at this. 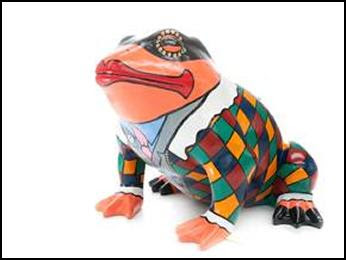 Yes, it's a decorated toad. We've got loads of these in different images around the city of Hull at the moment, unveiled to commemorate the 25th anniversary of Philip Larkin, one of the city's favourite adopted sons.

They are made from fibreglass and they look great. You can view them all here. However, you can probably guess what happened once they were unveiled to grand acclaim a couple of Saturdays ago.

Local toerags have daubed graffiti on them, punched holes in them or ripped off accessory features, such as the mohican on a punk-styled toad. On the local television news, we were greeted with the message 'NAT 4 JOHN' on one toad.

Some of them are indoors and therefore not in danger as they are only accessible during daylight hours and these places have wandering security people keeping a close eye. But for those placed outside, they are the mercy of a city's lowlife.

It's sad that as soon as I saw these things my first thought was that they would be damaged in some way. Given that some of these were designed by local schoolkids, it is a particularly scummy thing to do. In the grand scheme of things, there are worse crimes to commit but it'd be fantastic if the unscrupulous little sods are collared by CCTV and plastered all over the local press. Judging by the furious, tearful reaction of residents interviewed by the local media after the damage was found, it wouldn't actually be too harsh on them.

Larkin was librarian at Hull University for the last 30 years of his life and toads provided an image of work for two of his best-known verses. The toads will eventually be sold off for the benefit of local charities and environmental and Larkin will be commemorated more permanently via a statue at the railway station.
Authored by Matthew Rudd
Email ThisBlogThis!Share to TwitterShare to FacebookShare to Pinterest