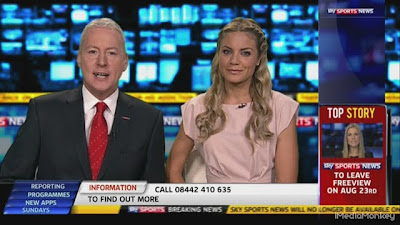 For my sins, I don't have Freeview. I like to watch live football on television and therefore hand over my subs directly to Mr Murdoch every year. Topically, this means that I'm unaffected by today's removal of Sky Sports News from the Freeview canon.

It coincides with the channel going HD and now sports junkies have to get the full Sky package in order to carry on viewing it. There has been a large grumbled reaction from Freeview users over this decision, and not surprisingly so.

Sky Sports News is television's greatest contradiction. Because of who owns it and the methods it uses, few people of a sporting bent can say they really like it but nonetheless it remains the first pick when flicking on the television of a morn and when arriving home. And there will be a sizeable number who use it solely and exclusively on a Saturday afternoon when the peerless Jeff Stelling is in full flow.

Much of the "news" is geared towards its own agendas and cross-promotion, hence why cycling has suddenly become a major importance to them because of the Team Sky project and its recent acquisition of Bradley Wiggins. Over the summer they almost forgot there was a World Cup on because they aren't allowed the rights to show it, while Wimbledon, the World Snooker Championships and the Grand National barely make the radar despite being obvious headliners every year by their very heritage.

They specialise in speculation, rehashes from the papers and finding tenuous angles from anything and everything that Premier League managers say in their press conferences. They don't just get comments from otherwise unemployable pundits, they then turn these pundits' unoriginal opinions into fresh news stories. "The top story on Sky Sports News; former Tottenham manager Gerry Francis has said Aaron Lennon looks a right pillock with that shaved arrow in his head..."

But for all this, it's done slickly and the presenters are smart, cheery and, with the exception of the ludicrous Jim White, keep the cheese factor to a minimum. And the easiness which the likes of Georgie Thompson (who goes out with one of Ant & Dec and therefore has ruined everything; the Sarah Greene du jour), Natalie Sawyer, Twitter darling Millie Clode and the pixieish Alex Hammond/Quinn/Hammond have on the eye can do no harm at all, especially as most of them do have either sporting or journalism backgrounds and aren't, as assumed by some, just pretty faces who can read. (New girl Hayley McQueen needs to keep her head still though).

But, now, the Freeviewers will have to shell out as Murdoch constructs his televisual equivalent of the Times paywall. If it's any consolation at all, this morning's HD launch has done little but hurt my eyes and the new typesetting and layout is wretched. You're not missing much. And, if we're all honest, every time we've missed Sky Sports News in the past we've not missed much - even though that never stops us watching it again. And if you're missing Jeff and the boys, there's always Garth Crooks on the BBC... oh ok, down the pub it is then.
Authored by Matthew Rudd
Email ThisBlogThis!Share to TwitterShare to FacebookShare to Pinterest

I actually like Sky Sports News, for all it's faults. Dropping it from Freeview is a huge error in my view, it's turning off some of Sky TV's best free advertising.

Incidentally, I'm sick to the back teeth of Sky telling me how great HD is, whilst trying to charge me an extra tenner to watch all the things I've already paid for, in a slightly better quality picture. The vast amount of advertising for HD suggests that most people agree, though I suspect we'll all change over in the next year or two.

Oh, to have some genuine competition for the Murdoch TV media.

Freeview at Medd Towers only takes in Channel 19 (Dave) or 25 (Dave Ja Vu). And sometimes, if I come over all cultural, BBC4. If it's football results I want then it's Sports Report on Radio 5 (at home or, if coming back from an away game, in the car).