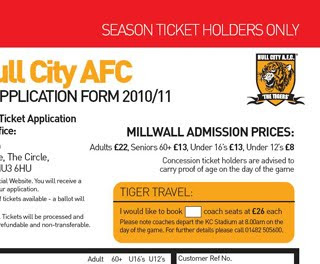 Tomorrow afternoon, Hull City play their first away fixture of the new season, at Millwall.

And I'm not going.

Without wishing to puff up something that in the grand scheme of things wouldn't be amazingly important, especially to this corner of blogdom that principally dislikes football, it is still going to be quite weird and sad. I have not missed an away game in any competition since April 2007, when the Tigers went to Cardiff City and won 1-0, guaranteeing Championship safety and doing the game as a whole a mega service by simultaneously relegating Leeds United.

Since then, I have driven my car or caught trains to every ground we've visited. I've got stuck in fog in Norwich, been thrown off a train at Macclesfield en route to Wolverhampton, missed an entire half at Arsenal due to a bad accident and an even worse diversionary route, had the paintwork on my car scratched to buggery at Portsmouth, arrived in Colchester only for the match to be postponed, picked up a parking ticket at Blackpool and driven off from a petrol station in an embarrassed hurry from Crewe.

This season, financial constraints are curtailing my Saturday viewing pleasures. The Championship brings with it a number of Yorkshire derbies, plus Scunthorpe, and so I'll get a reasonable fill of away matches. The problem I have is I work in Stockport on Saturday nights and therefore can't volunteer to be "designated driver" from Hull as I'm unable to take people home afterwards. Midweek games are different as I can fill the car with fuel, and then people, and then collect appropriate monies off those people who otherwise would have had to travel on the club's coach service, which is one step away from a Bolivian mountain bus for its comfort, speed and value, and requires you to take two days off work for the very longest trips.

Away games involve so much more than the football, and after a Premier League season in which Hull City did not win a single match on their travels, you appreciate the other joys of the day even more. The verbal jousting and excited discussion on the journey there, the discovery of a friendly pub where you'll see all the other guys from Hull you knock about with. The walk to the ground, the singing, the laughter at how condescending the home team's match programme has been about your team, the humour in defeat (we know much about this) and the journey home which can be anything from excited discussion to absolute silence.

I'll miss a lot of that this season. And yes, Millwall might seem as good an away game to miss as any, given their reputation, but I've been there twice before and it is no different to anywhere else. I want to be there but common sense and a belated spot of financial wisdom dictates I'll be listening to online commentary instead.

A win at the New Den won't be for me, but let me feel like it is. C'mon City.
Authored by Matthew Rudd
Email ThisBlogThis!Share to TwitterShare to FacebookShare to Pinterest