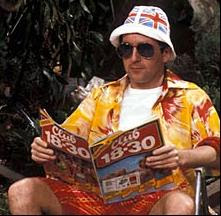 The Young Ones was on telly last night. It was the Nasty episode, featuring a brief reunion for Captain Sensible with the rest of the Damned, Alexei Sayle as a Transvaalian vampire and Terry Jones as a pissed-up vicar.

One of the great flukes connected with The Young Ones was the recruitment of Christopher Ryan to play Mike. Anyone who has digested the background to this most cultish of cult programmes (the Radio Times used to call it "offbeat" in the 1980s, which was a very of-its-time way of saying "parents will ban their kids from watching it") will know that Peter Richardson was supposed to be the straight man of the deranged quartet but had a row - not sure what about - with the producer and walked off.

I've always assumed that Ryan had no connection with the alternative comedy scene at all prior to this. A check on his background suggests he was already in his early 30s when The Young Ones began and he has never been a comedian. My understanding has always been that the Richardson flounce-out happened so close to filming that they had no time to rope in another friend from the "scene" with little acting experience, and instead held auditions for jobbing actors that roughly fitted the role, and Ryan got the gig.

Of course, since then he has become an outstanding supporting actor for so many associated comedy series with the Comic Strip scene. He was a television director in the marvellous Cassie episode of the oft-forgotten Happy Families (wish someone would repeat that), he was Dave Hedgehog in Bottom, and did episodes of programmes like Girls On Top and a fair few of Absolutely Fabulous.

Then there was A Small Problem.

I look a bit to the TV Cream staffers for aid here as my memories of this weirdest of weirdcoms are very slight. As far as I can remember, it was co-written by the bespectacled decorator in Brush Strokes and set in a prejudicial future world which decreed that all adults under a certain height (let's call it 5ft 3in, just so we can include Richard Hammond) were subject to some kind of apartheid. I remember nowhere enough to establish whether it was meant to satirise real apartheid around the world or just some concoction cooked up by a chap who didn't want to write a sitcom about bosses coming round for a burnt dinner. Or, indeed, about jack-the-lad decorators.

Ryan, being diminutive, was cast as one of the featured "victims" of this strange world. There would be scenes of grown-ups (literally and physically) avoiding him in the same way that a fly avoids a cylindrical newspaper. I was 14, so didn't get any political message particularly, but even I wondered what the hell was going on.

And, remember, this was a sitcom. There were lines that made the studio audience - all presumably selected for their likeness to John Cleese and Jodie Kidd - guffaw and holler to the extent of coughing fits. It was promoted as a light-hearted programme, pre-watershed, albeit on BBC2 where few haughty people with a Tunbridge Wells postcode could ever notice it.

And the lyrics to the theme tune made it quite clear from day one what was going on here. "They've got small bodies and small minds, they're all small fry with [can't remember this bit], they're the lowest of the low, they refuse to grow you know, and they like it down there."

To prove how little I remember, I actually initially had this programme down as A Small Wonder, which was that abysmal child-robot monstrosity from America, wasn't it? I'm sure Christopher Ryan wasn't in that. Anyway, edit done prior to posting.

I'd like to see A Small Problem again, just so I can decipher exactly what the intended tone of it was. Of course, the 1980s weren't yet entirely swathed in political correctness. Mainstream sitcoms (and, frankly, soap operas) were still getting away with racial and social stereotyping that had been commonplace the decade before. But this was intending, I expect, to project a combination of surrealism and satire. It was brave, certainly. I just wish I could remember if it was any good.
Authored by Matthew Rudd
Email ThisBlogThis!Share to TwitterShare to FacebookShare to Pinterest

I have NO recollection of this whatsoever, but it sounds bizarre. Like a series-length adaptation of that Randy Newman song. Perhaps it was all highly ironic?

I've recently been revisiting the Young Ones, as I was a student when it came out and apart from referencing aspects of my own life, it was genuinely ground-breaking at the time. I'm pleased to say that I still find it really fresh and funny. The 'dysfunctional family' dynamics between the four of them were brilliant, and the whole thing had an energy that's rarely been equalled ever since. And loads of knob and fart gags too.

I never knew the Peter Richardson back-story. He was very talented (his 'Spider' in the 'Bad News' pieces was spectacular). Wonder what he ended up doing?

Didn't the Goodies do the 'apartheight' gag years earlier?

A bit late here (I've been away...). There was a lot of fuss in the Radio Times after this started through people not seeing it as satire but a simple attack on "smalls". My Mum (5 foot and a half inch) sent a rebuttal in which they printed in a special teeny tiny font (she had submitted it tiny herself) and effectively drew an end to the subject.