Charity begins at (not my) home 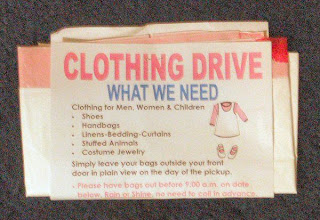 I usually receive three types of delivery to my door each day. Firstly, the standard mail dropped through by the postwoman. Secondly, the parcels containing QVC tat that has been ordered by a member of my household that isn't me, but I end up signing for.

And thirdly, the unsolicited stuff.

Now, I wonder if this is true of your patch; the usual array of takeaway menus and fliers for local hairdressers has been usurped by branded plastic bags pushed through by charities for you to put unwanted clothes and other stuff in.

I assume the idea is for you to fill the bag, and then for them to come round at an allotted time on the bag cover to collect the goods.

And, if you don't have anything to give them this time, they should come and recollect their bag. Waste not, want not. They are a charity, after all.

Catalogue droppers do this. I have had a Betterware catalogue put next to my milk bottle holder every week or fortnight for goodness knows how many years now. I once nearly ordered a plastic fish slice, but not quite. And, diligently, the woman who drops the catalogues off pops back a week (or fortnight) later and collects them all again.

But these charities don't collect their bags. More to the point, I never see them coming round to collect full bags that good people have prepared for them, never mind the empty ones.

So, for the charity in question, nine times out of ten it becomes a fantastic waste of time and resources.

These bags, and I get at least a couple a week, sadly now go in the bin. Even if I had stuff to give them, they wouldn't be round to collect it. And beyond that, I have no use for the bag.

They may as well just throw the bags into their own bins at charity HQ and cut out the middle man. Or, perhaps more usefully, take on volunteers willing to do it properly.
Authored by Matthew Rudd
Email ThisBlogThis!Share to TwitterShare to FacebookShare to Pinterest

And a lot of them aren't charities. They're chancers who take people's old clothes, chuck out the crap stuff, and try to flog on the rest for a profit. See if you can spot a "registered charity number" on the packaging... bet you can't.

What do you do with your old Hull City shirts Matt? Donate them to The Tigers' Museum?

Heh, I assume this is a dig. They are still worn on matchdays, John. Especially as I don't buy the latest shirt until it's been reduced to a tenner in a March sale.