He ain't no square with his corkscrew hair 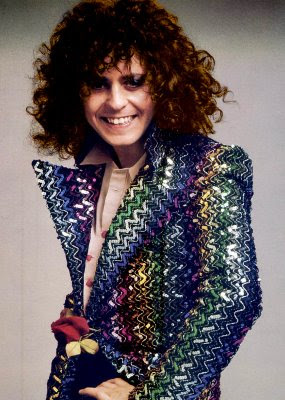 Marc Bolan died 33 years ago today. As his car crash took place only one precise month after Elvis Presley fell over in his khazi, the death of one of the most charismatic rock stars the UK has produced was overshadowed at the time and remains so today.

I still suspect his legacy and assessment of the impact his music had on the British charts and culture as a whole suffered. He should be mourned and talked about on a scale similar to Freddie Mercury or Brian Jones.

I was four when he died and hadn't a clue, and my parents were not Bolan fans so they don't remember a thing either, though they tell me we were on our favourite caravan site in Dorset when the news of Elvis Presley's demise was announced. Oddly, we were on the same caravan site three years later when Yootha Joyce died, and that I do remember as my dad revealed it to my mum upon returning from the onsite newsagent with a copy of the Telegraph.

I first heard of Marc Bolan in 1985 when the Power Station did that beyond-all-realms-of-awfulness cover of Get It On. Back then, I didn't know it was awful, of course, as I had no notion of the original recording nor the bloke who composed it. I only found out about it when reading the sleevenotes on Now 5, on which it appeared. To this day it's a travesty, that version. They managed to make it two minutes longer while only featuring half of the verses. It served only as an excuse for Andy Taylor to show the other half of Duran Duran - they were having a trial separation at the time - that he really could play elongated, directionless, self-absorbed guitar solos.

Still only 12, I was not yet at the stage where I wanted to find out more about a dead rock star when every new pop star coming through and every single being released was an exciting event. I was for the now, not the then, something which makes me despair when I do my retro club nights and people half my age just don't appreciate what they're hearing. Bah.

The next time I heard the name of Bolan, and T Rex, was when my brother was in a sixth form band that recorded a professional demo and sent it out to record companies and music critics. One of them said they sounded like T Rex, which was a disappointment for this group of moody denim-clad teenagers as they were hoping to show AC/DC influences. But they took it as a compliment, even though none of them had heard T Rex before. It prompted them to buy a T Rex album for the first time and listen to it.

Then out came that Levi's ad with Brad Pitt in it.

This got 20th Century Boy back into the charts, 14 years after Bolan's death. And I bought the single. That riff remains one of the greatest written and has been much imitated by subsequent composers. This was the moment for me. From here onwards, aged 18, I wanted to know more about Bolan and spent quite a few years listening to him more than any other artist. It was the first time my musical tastes had ever regressed, and since the end of the 1990s that's all I've ever done.

What I like about Bolan is that he was all that was required of a rock star and all that was required of a pop star without alienating either. He was a musician and a looker, a writer and a performer, someone who appealed to kids and adults without either party feeling like they were unusual. Younger girls could do the screaming and worshipping, older lads could examine his guitar playing and delve into those lyrics.

As for the legacy he left, it remains one of the great under-reported achievements in chart history that Bolan had four UK No.1 singles in little more than a year, from Hot Love in the spring of 1971 to Metal Guru in the early summer of 1972. Fleshing it out a little, the eight singles he released from the end of 1970 - the breakthrough, drumless "straighten your curls" hit Ride A White Swan - to the end of 1972 - the stop-start, death-premonition song Solid Gold Easy Action - got to either No.1 or No.2. Back then it was an arduous task to establish yourself in the charts but Bolan made it look easy. The public only stopped him from having more No.1s thanks to their irritating ear for a novelty single - three of Bolan's runner-up hits were held off by "comic" songs.

20th Century Boy wasn't one of those eight. It was the ninth of the sequence and got to No.3, still no bad thing. But for period from 1973 to 1977 was Bolan's down phase, with a solitary Top 20 hit per year and severe problems with marriage, money and drugs.

That he is regarded as a forefather of punk is a bit of a misnomer. I do wonder if the likes of Rat Scabies or Bruce Foxton were avid listeners to Telegram Sam or Jeepster five years before Bolan stepped in to give them an audience. I'm equally uncertain as to whether Bolan thought the emerging new wave bands of 1977 were especially good but he knew they would get a new crowd to his shows and get people watching his TV programme. Smart man. He did it to revive his own career as much as to start theirs. And the bands in question weren't going to turn down such mega publicity. So, Bolan took the Damned on tour and got the Jam on Marc and the punk teenagers embraced Bolan as someone who was helping promote their culture. And even now, British society has never really accepted punk as a viable musical genre, greatly rated by the mainstream, even though much of that mainstream is now in its 40s and 50s and were of punk's target generation. Punk still resuscitates tales of swearing on telly, treason and early deaths before anyone mentions the songs. And Bolan is allegedly an "inspiration" for this? He might have seen the need to promote new music but that didn't mean he necessarily rated the music he was helping to promote. Anyway, with glitter on his face and wildly colourful clothes and headgear, he seems to be more of a New Romantic inspiration, though because he smiled a lot and rarely used synthesisers, he doesn't get mentioned as much as Roxy Music or David Bowie.

Bolan remains my only musical hero who was before my time and yet, oddly, was the last musical hero I ever had. Bit of a contradiction. I'm not alone. There is a big post-Bolan generation of fans out there. When I worked for KCFM, we had a Bolan weekend to mark the 30th anniversary of his death, playing loads of his records and giving away albums. My boss dug out a Revox recording of an interview he conducted with Bolan in the last year of his life when the man himself was in Hull for a gig. I listened, and shivered throughout, as if I'd been locked in the freezer for the night.

I suppose the most prominent use of Bolan's work in recent times was I Love To Boogie's inclusion in Billy Elliot. That's a sharp and short ditty but it was from 1976, when Bolan's life was desperate, and it isn't remotely representative of his best art. You need Electric Warrior or The Slider for that. And I've just put one of them on now to mark the date.
Authored by Matthew Rudd
Email ThisBlogThis!Share to TwitterShare to FacebookShare to Pinterest

What a great piece. There's something much more engaging about Bolan than Bowie or Bryan Ferry, who can come across as cold fish. Although reading Tony Visconti's biog (and if you haven't, you should) Bowie comes across as Mr Pleasant (actually, Bowie is reported like this in several other rock biogs:Stevie Ray Vaughan, Guy Pratt).

Like Roxy, not cracking America is probably why his legacy and collective memory has devalued to non-fans.

For me this is his finest performance of 20th Century Boy.

PS do you know how you get from Bolan to Weller? Find out here

Finally, I'd also add Tanx to his Must Hear albums..

Not really a fan but I gather that he was a nice man. For instance: gifting Rick Wakeman a virtually non-existent piano part on Get it On just so he could have the session fee because his landlord was promising to throw him out of the flat he rented because he was in arrears.

Saw Guy Pratt do his stand-up show and he made the observation about Andy Taylor that getting kicked out of DD once was careless but twice was just downright stupid.

I remember t his day well. I never much cared for his TV show but I was shocked by his death, being but 12 years old. I didn't really get into his music until about 85 when suddenly I discovered Jeepster and played it to death for about seven years.

As a Damned fan til the day I die, I believe that punk was then and still is a viable musical genre. Indeed, The Damned are alive and well, and released a new studio album last year. It's new line up of course, but Vanian and Sensible are still there, though Scabies split from the group some years ago. They still do live gigs and David Vanian is god. This article might be of interest to you:
http://www.samgreen.co.uk/dandydamned.htm

Well Anon - though I assume your name is Sam - I'm with you that punk is a viable musical genre. Unfortunately, there is still an influential element of society that see it for its extra-curricular impact and forget to say, or notice, how good New Rose was.

Unfortunately, most people think that punk is simply three chords, slamming the government. Which essentially 'other' bands did. But The Damned were - and still are - seeped in psychedelia and US garage rock, with nods to the Shadows Of Knight, Electric Prunes, etc (see Naz Nomad & The Nightmares). I digress - you talk about Marc Bolan, I end up on a tangent about the Damned. Sorry. Anyhow, glad you enjoyed and no it's not.

By the way Mondo, those Bolan songs you mention - could titles like that have been thought up by any artist OTHER than Bolan? They're so *him*!