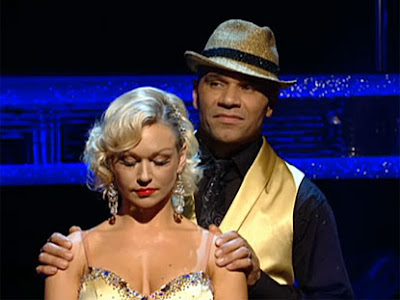 Strictly... is chugging along eventfully so far. Quality, humour, not much ego going on and the slow demise of Bruce Forsyth as a live television performer.

But the results show, half live and half taped, with all its alterations and cackhandedness, is utterly dreadful. And the removal of the dance-off ranks as the worst decision anyone has made on the show.

Barring a major error, the judges would have saved Goldie and hoiked out Peter Shilton at the weekend. That's a given. Goldie ended up in the bottom two because he didn't attain enough support to fend off the inevitable surge for the true dreg dancers beneath him that befits the tiresome tradition of Brits supporting an underdog.

But at least any anomaly from the viewers could be cured by a few sharp words and a shrug of apology from the judges. Never would they evict the wrong person, irrespective of their feelings for them as professionals or human beings.

That's gone now. The public stand alone as the kingmaker for the series. They watch the show to be entertained and educated, not to exercise their vote with fairness and expertise. And they will chuck out the celebrities who don't make them giggle with Tess and Claudia as much as they will anyone whose toes point the wrong way or whose shoulders are too hunched.

Ann Widdecombe or Paul Daniels, the other two basement-propping contestants on show, could now conceivably make real progress in the programme without improving as dancers and while seeing their shtick - Widdecombe as the willing ignoramus, Daniels as the forgetful joker - keep them afloat. I'm no different. Faced with saving either Widdecombe or Kara Tointon and my vote goes to the one who is most likely to keep me watching. Sorry, Kara.

So those who are not absolutely superb or not spellbindingly abysmal are the ones in trouble. Goldie has proved that. The likes of Felicity Kendal, Gavin Henson, Michelle Williams and Patsy Kensit are all in real danger unless they turn into market leaders.

Given the complaints the judges readily aired when the public kept saving John Sergeant two years ago, forcing them again and again to vote for a pairing that didn't deserve to go at all, it's a surprise, as well as a mistake, that the paymasters have taken this big privilege and responsibility away from them. Their initial scoring on the Saturday night is now all they have. Alesha Dixon has her faults - the main one being she knows bugger all about dancing - but she's already had the bottle to declare on the show she feels the lack of dance-off is wrong.

Sticking with the results show, exactly why is Claudia Winkleman there? All that's needed is a recap, a professionals-only dance, a quick natter with a smattering of contestants, "here's Robbie Williams!" and then the long-winded announcements. If that requires two people, it's over-egging the pudding a bit. And at the very least make her wear a proper frock so she looks at least a little bit dressed for the role. She isn't on a sofa blathering on about eye make-up now.

After two weeks, I think it's Matt Baker's to lose, Pamela Stephenson has a massive chance if she maintains the charm and good cheer, and Scott Maslen and Jimi Mistry are decent outside bets. The other two soap women are way too uncharismatic and will go after the obvious dregs have finally done one.

Oh, and after his heartbreaking non-performance on Saturday, it would be the decent thing if Bruce just admitted he'd shot his bolt and it was time to put his feet up. No wonder Anton du Beke is having fun with the Rt Hon Ann - it's a hell of a way to bow out as a dancer before taking over as principal host next year.
Authored by Matthew Rudd
Email ThisBlogThis!Share to TwitterShare to FacebookShare to Pinterest

I'm getting bored of Winkleman's shtick now. "Ooh, I'm a bit ditsy me and I can't understand how I got into this telly lark!" is starting to wear a bit thin. You can't be serious arts presenter and John Noakes at the same time.

Everything else you said there is cock on.

Agreed. Daniels has to go soon, if only to stop him trying a card trick or something as part of every routine.