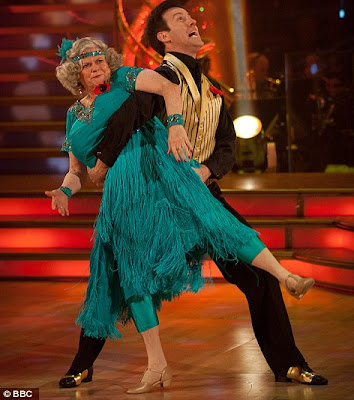 Strictly..., then. It hasn't been amazing for its newsworthiness so far this series, but now it's starting to hot up. It appears that Ann Widdecombe is coming under pressure to quit the programme for fear she might win.

I don't think she will win, but if she does, then so be it. Again it takes us back to almost arcane argument about whether it is an entertainment show or a dancing show. Only the judges seem to think it's the latter.

That's their prerogative, of course, as dancing connoisseurs, but at least Craig Revel Horwood is consistent in his view. He is the only one who says Widdecombe is a bad dancer and proffers accordingly bad marks. Len Goodman, who has in the past offered a whinge about the public not protecting the dancers as opposed to the cabaret acts, is now marking up Widdecombe having previously said it was a dancing contest. He may have changed his mind or he may just be getting confused as to what he really believes.

Widdecombe won't win it but, unlike John Sergeant, she won't quit either. She's having way too much fun and doesn't have any loyalty to the programme or the BBC to offer herself as a sacrifice. One of the criticisms Sergeant got when he dropped out a couple of years ago was that it was unfair to his dancing partner, Kristina Rihanoff. While I don't suppose for a moment the great Anton du Beke is high on Widdecombe's priorities when maintaining her stance, he seems to be having more fun than ever chucking her about and his patience and humour is clearly helping her catch the bug for the show.

Lorraine Kelly took the ludicrous stance of saying people shouldn't vote for Widdecombe because she decided in her Home Office days that pregnant prisoners should remain cuffed when giving birth. It was a horrible policy but it is entirely irrelevant now. It suggests anything from a contestant's past that satisfies present prejudices seems to be fair game, if we use her argument. England fans could therefore have got rid of Peter Shilton for diving over that Polish shot in 1973 which was key to the nation's non-participation in the 1974 World Cup, not because his charleston was lumpen and weak and he couldn't smile on cue.

When Jimi Mistry exited at the weekend, his partner Flavia Cacace didn't look shocked or upset. She looked downright livid. She's a dancer who expects the worst dancer to go, and this is to be expected. But while there is an aesthetic pleasure from an immaculate dancer (which, incidentally, Mistry was proving to be anything but), the Strictly... format offers room for humour, charisma and, for want of a better expression, an element of journey making. Widdecombe can learn steps but has no natural rhythm and, therefore, du Beke is creating routines directly from her incompetence and achieving cracking results from it.

The removal of the dance-off is controversial and I'd rather it was still there. Three of the five "bottom two" scenarios so far would have had different outcomes had it been left to the judges. But so far it hasn't caused the biggest possible stink among the purists because Widdecombe hasn't once been in the bottom two. Once she does end up in there, let's just see if the public have the sheer nerve to say she's worthier than Scott Maslen or Kara Tointon. That would make fantastic television if so, and the outcry would be as entertaining as Widdecombe's clumping quickstep. Sergeant staying in at the expense of Cherie Lunghi would have nothing on this.

The bigger scandal at the moment, to be honest, is that both Michelle Williams and Gavin Henson are surviving despite being neither great dancers nor great characters. Williams talks well of being a trier but isn't pleasing the purists nor entertaining the proles with her performances, making one wonder if it's Brendan Cole who is actually keeping that pairing afloat. Henson, meanwhile, also benefits from a personality partner, and may have all of Wales supporting him, a la Rosser & Davies, but one can't help but feel it's the exposure of his chest and little else that is persuading people to dial the number next to his name. No straight male judge would dare make a lewd comment on Patsy Kensit's expression of perfect filth when doing a latin dance, so Alesha Dixon is both out of order and damnably unconstructive when critiquing Henson purely on the subject of how attractive his backside apparently looks (unless she's doing it because she hates Charlotte Church). The judges, as they like to tell us, are there to comment on dance and not on personal image. Genesis did a song about people like Henson...

An element of personal integrity or historic fondness will always assist when the decisions are made by the nation. Widdecombe has a degree of public respect aimed her way from even those politically her opposite. Felicity Kendal remains a national treasure (eugh) due to one sitcom done with a muddy face and hugging denims in 1975, something that is all she's ever managed if one believes the references to her career made on the programme. Pamela Stephenson, as a 30 year old goddess in 1979, undid her top on television and activated every gramme of testosterone across the nation with the immortal question "Would you like to rub my tits too?". That she still looks pretty much the same at almost 61 as she did then also helps. Kensit has a complicated life story but is improving as a dancer and, when her hair is down and her dress is short, she's hotter than anyone else thereon. We all know an alluring mature woman like her, and they have extraordinary power. It's fickle, it's idealistic and it's pretty vacuous, but it's how viewers of such programmes work. The sooner the dancing fraternity accepts that, the better.

For all this, my predictions haven't changed. Matt Baker is still the front runner, combining a boyish, bashful decency with a sense of humility and an excellent ability to dance. He hasn't had tens and therefore isn't peaking too soon, which might not be quite so straightforward with Maslen, although he too is coming across as fundamentally good. Tointon is technically impressive but lacks charisma, while Stephenson is in need of a second wind and may not necessarily get it.

Barring a major surprise (which, in Kensit's case, could happen), the remaining five, including Widdecombe, are heading for the exit over the next five weeks. But nobody should be shocked, nor annoyed, if Widdecombe is the last of that also-ran quintet to go. The backlash this week doesn't seem to have worn off the novelty of seeing this squarest of women glam up and perform daft routines with a partner who is killing himself laughing throughout, and the prospect of her doing a bitty but self-deprecating salsa is infinitely more tempting a spectacle than seeing Tointon do a spot-on tango with a shiteating grin.

The show is, like any other light entertainment offering, principally about attracting viewers. I'm sure dance connoisseurs have been gently reminded of that bigger picture and, if they don't agree with it, they should be reminded that the non-celebrity Come Dancing was on after 11pm on a weeknight.
Authored by Matthew Rudd
Email ThisBlogThis!Share to TwitterShare to FacebookShare to Pinterest

Len's volte face is, I suspect, part of a clever game being played by the BBC. Let the public have their way unfettered, make the judges keep schtum about their grievances, let a complete duffer win or come dangerously close to it, then next year say "Now, do you want people power or good dancing?". Chances are the BBC will then get a mandate to fiddle the votes all it likes as long as honour is served on the dance floor.