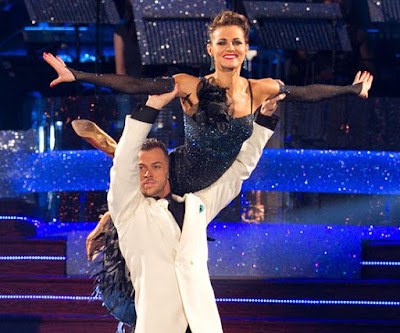 Strictly Come Dancing will be interesting tonight, as of the half dozen remaining, there is a very real chance that one of the "big four" will go.

The splendid Patsy Kensit's disappointing exit last week exposed more than ever this brand of voting that is making the eventual outcome unpredictable and prompting the dancers and judges to panic a bit. Every professional dancer who has left the competition while seeing Ann Widdecombe and, to a lesser but just as relevant extent, Gavin Henson survive will be seething under the fake tan and tooth caps. The judges feel the same. The rest don't, clearly - and they're the ones that matter.

But with Widdecombe clearly getting the entertainment vote (though I expect it's Anton du Beke's attitude to it all that is gathering in just as much core support) and Henson getting the girlie vote, a mega shock could be on the cards tonight. Though the departures of Kensit and one or two before her were premature, the sadness at their farewell will be nothing if Widdecombe and Henson each survive another week.

Matt Baker, Scott Maslen, Pamela Stephenson and Kara Tointon are all tremendous performers and, crucially, they have also come across as sporting characters as well. They are focussed but not to the extent of forgetting that a television audience wants to see sparkle as well as steps. They've been the four front runners from day one. And, thanks to Widdecombe's goofiness and Henson's pectorals, one of them might now go.

I think Baker and Stephenson are probably safe until the final. Both are flawless, consistent, amiable, in good partnerships and have found the key balance between competitiveness and humility. Both have also recovered brilliantly from mild setbacks. It's the current EastEnders star and former EastEnders star that feel in danger, to me. Maslen is a terrific dancer and a likeable bloke but is capable, as he proved last week, of spectacularly cocking it up. The two 9s he got for a dance littered with basic errors were scandalous, frankly. Tointon, meanwhile, still doesn't do it on the charisma front for me and, in a reflection of the reality television mentality that we often see, the majority of voting viewers will be jealous females who want her out.

I wouldn't miss Tointon if she went, but there would be an outcry from the dance fraternity if she, or any of the other three, did get voted out. The absence of the dance-off will be felt more than ever if so, and expect at least one of the pro dancers to kick up a stink in the papers or on Claudia's settee over the coming week.

Widdecombe wants to win. I still don't think she will - not least because I expect there will be a furtive change in the rules to allow the judges a bigger say in the final, just in case she gets there - but this weekend will be the ultimate test of just where the rule changes to Strictly... has taken them.
Authored by Matthew Rudd
Email ThisBlogThis!Share to TwitterShare to FacebookShare to Pinterest

I've said from the start of this series that the laissez-faire/people power approach to voting this year is intended to make things easy next year when they go back to the old system. It's the Harry Enfield Lee & Lance "Is that what you want? 'cause that's what'll happen" principle at work. Let the public make a mockery of the show and then go back to nice, sensible dance-offs.