Could be a spoiler here, careful...! 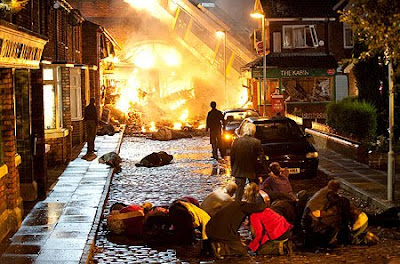 So, the Coronation Street tram crash. I don't think it was flawless, but I do think it was brilliant. The live episode was a triumph for every performer and crew member with a role to fulfil.

And, as people escaped, or found themselves further trapped, or sipped brandies in the Rovers while a GP that made Dr "call me Fred" Fonseca from EastEnders of yore look positively charismatic dabbed wounds and wondered where ambulances were, these stories continued. Gary was going through hell via flashback and double vision as he heard the bangs and crashes from within the sanctuary of his family home; Max's evil mother turned up and admitted to taking him to "test" Steve and Becky's compassion; Molly breathed her last via a confession to Sally about Jack's true parentage; John managed to accompany Fiz to hospital to see the premature birth of their daughter while also eventually dragging the supposedly lifeless Charlotte from the house just far enough for a dopey cop to assume she had been caught in the blast.

I wonder how much running Graeme Hawley, as John, must have done during the live episode to get from scene to scene? It's well known that the outdoor scenes of Coronation Street are filmed in an entirely different area of the Granada complex to the indoor studio sets. He had to be at the hospital, then back home, then in the back alley. There were fewer than two minutes between his last scene indoors and the moment he appeared back on the street and feigned emergency services duty in order to get past the cops and into the house to get Charlotte's body away. At the very least, he did amazingly well to deliver his lines with both full-blooded conviction and a lack of breathlessness. If a star of the show must be singled out, this is the man. And Jennie McAlpine's performance as a frantic mother-in-waiting was excellent, even though if there is one role an actor wants in the event of a one-off live performance in front of a third of the nation, it's that of a woman in childbirth, as deviating from the script is easy.

And the other titbit observations that one makes during a live episode; firstly, there were no kids at all. Ashley's two, Dev's two, plus Russ, Max, Amy and Simon, all made no appearance. Even Molly's rescued baby, or the plastic version of, wasn't seen in the hospital. Ten years ago a ten year old (ish) David Platt, in school jumper and with football, was the first person seen on the 40th anniversary live episode. Perhaps the nature of it was too much for them; perhaps in the case of each they're not child actors to any real extent (with the exception of the lad who plays Simon, who out-acts most of the adults a lot of the time) and therefore in the real world their scenes are filmed and re-filmed and chopped, dubbed, edited, spliced, everything.

Simon's absence also ruled out an appearance from Deirdrie in the live episode. She was looking after him while everyone else attended Peter's bedside. I wonder if Anne Kirkbride had ruled herself out of appearing, prompting the storyline, or if the scriptwriters had to tell her that the plot demanded she was deemed unnecessary? There was also no Emily in the live episode, despite an appearance in the build-up edition the previous evening. Is Eileen Derbyshire not up to live telly?

There has been a bit of jumping on those who dare to praise these actors for their performances by pointing out that actors in theatre do live performances all the time. Well, yes, but in front of a few thousand, not 14 million. And if they get something wrong, they have the next night's performance to get it right. Live television acting is such a novelty even to high-calibre performers that it won't feel like theatre at all. I genuinely couldn't see or hear a mishap, and that's both a credit and a relief. Some people tune in for the car-crash possibilities (or tram-crash, if you prefer) whereas I hate the thought of something going wrong. I'm a Coronation Street nut and I want it to be spot on all the time. I don't want them to be actors, I want them to be people. And if any of them get it wrong, they have to live with it forever. Scott Maslen declared on Strictly... that he knows he will always be remembered as the guy who cocked up on the live episode of EastEnders, irrespective of the heights his career still has in wait for him.

Realism wise, I do wonder why Sally wasn't given a helmet once she was under the rubble with Molly, even though the fireman had been heard asking for one for her prior to leading her through the cordon. Could it be to do with the wig that Sally Dynevor has to wear? Also, given that it was clearly a gas leak that had caused the explosion, I suspect that all gas to the area would have been cut off afterwards, hence my confusion at Roy being able to use his hob in the cafe.

I loved the live episode, and I've been gripped by the whole project. It's had its faults - Mary's comic turn in the cafe was, for once, out of place last night, and there wasn't a single real tear as the performers tried desperately to cry properly - but all involved deserve the sort of praise usually reserved for the elements of theatrical performance that are upheld in the name of snobbery. Soap or not, this was outstanding stuff. Now to realise Rita is missing. She's not in some gin den, damn you all...!

My only gripe now is that the TV listings mags for Christmas and New Year are in danger of giving stuff away - not through synopses, but through their insistence on listing the cast...
Authored by Matthew Rudd
Email ThisBlogThis!Share to TwitterShare to FacebookShare to Pinterest

I thought the live ep was great. If you didn't know it was live you'd have thought it was recorded. I have my doubts about these live eps as you normally get a slight pause at the start of a scene while the actors wait for a cue, not last night.
I read in yesterday's Mirror (yeah, get me) that the actor who plays Stape had some special shoes constructed to help him run and grip faster. His shortest time between scenes was 1m 40s and he timed the run to 1m 30s, his biggest challenge was not appearing out of breath. Whatever, he's a bloody good actor.