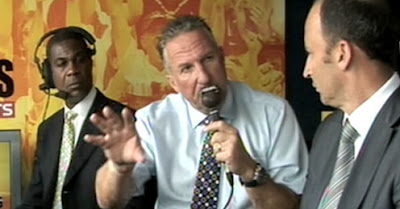 Michael Atherton, Nasser Hussain, Ian Botham, David Gower, Michael Holding and Shane Warne are the six commentators looking after the Ashes series for Sky. Over on the BBC, Jonathan Agnew, Michael Vaughan and Geoffrey Boycott are among the Test Match Special team bringing their ball-by-ball banter to overnight listeners.

They all have something very basic in common that even non-cricketists will know. They all, very simply, used to be international cricketers themselves.

Cricket, along with snooker and athletics, is fortunate enough to have a whole range of educated, articulate and knowledgable guys coming out of the game who are broadcasters in waiting. In fact, these three sports have always done this.

Now look at football. Every commentator is still a football-loving communicator and journalist first and foremost. They have never played the game for a living and so their insight comes from research, observation and understanding of the mechanics of the game rather than direct experience of it.

The only ex-footballer in the major broadcast media whose role isn't either as a summariser or pundit is Gary Lineker, and although he took to presenting well, that is all he does. He doesn't describe, he doesn't comment. He reads autocue, tells dodgy jokes and makes the weekly claim that Alan Shearer has something insightful to say. The get-out for Lineker against those who don't rate him is his former England team-mate John Barnes, who was simply the worst presenter on any kind of television at any point ever, although as he was on Channel 5, people often didn't notice.

I have to say I'm in favour of both practices at work here. I'm assuming that the reason footballers haven't become leading commentators is because none of the ones expressing interest in television or radio work have the intelligence to do it properly. It's easy and sometimes forgivable to trot out the usual artless soundbites but so much harder to put pictures into descriptive, emotive and accurate words all while dealing with talkback, checking notes, communicating with your co-commentator and still spotting the ball while all this is happening. I can't think of a single regular football pundit or summariser who I'd expect to be able to do this job. Andy Gray is a possibility, if pushed, though I suspect he gets too much fun from telling referees they don't know the laws of the game to have to go impartial and professional. In fact, Stan Collymore leaps to mind as someone who could commentate if given the opportunity, but only if a) people were finally prepared to put his private indiscretions aside; and b) he could keep his opinions to a minimum. He's very, very good on talkSPORT, even though it's not a station I actively choose to hear very often.

But in the case of cricket, ex-players make up the majority of voices they have hired to lead the commentary since the days of Arlott and Johnston. Even Henry Blofeld, the mainstay of BBC radio coverage until recent times, had a decent university career and only missed out on the pro game through injury. These former cricketers have the wit and intellect to combine the role of both describer and commenter, and switch roles frequently in order to do so. There isn't the jingoism from them either, even though we know how much patriotism exuded from the likes of Botham and Hussain when they played.

Perhaps it says more about footballers than it does about most other competitors that no ex-footballer has been trusted with the kind of responsibility in retirement that many of their peers in other sports have. The only other reason I can think of is that most high-profile footballers quitting the game are set up for life and don't actually need to work any more.
Authored by Matthew Rudd
Email ThisBlogThis!Share to TwitterShare to FacebookShare to Pinterest