"Til stabbings, drownings or bigamy do us part..." 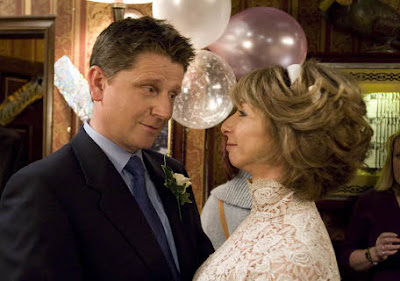 Right, I was watching Coronation Street last night, as always. It occurred to me that Gail must have the worst marital record in the history of soap. She's been married five times to four blokes with three of the marriages ending in death, including one which tried to take her and the kids along for the experience.

Assuming that Brian and Richard had life insurance, it amazes me that she hasn't had her collar felt already over potential scams. Oddly (spoiler) though, she is about to be questioned over her latest husband's demise even though she didn't want him to go through with the scam in the first place.

Anyway, I've been having a think. There are other phenomenally bad marital records in soap. On Coronation Street alone, there are two couples who are on their second marriage to each other (Ken and Deirdrie; Kevin and Sally), while Gail, Liz and Steve have also married the same person twice in the past. Steve is 36 and on his fourth marriage - I reckon no bloke in the whole of the UK is in that position for real, unless he comes from a polygamous background.

Mike Baldwin married four different women and fathered children with two more. Fred Elliott married three times at least and proposed to countless others. One of the women he did get down the aisle turned out to be bigamous, and that brings us to Peter Barlow, who was in two marriages at once and assumed he could get away with it. Pam claims to have seen off three husbands, Rita is twice widowed, Betty is twice widowed, Norris twice divorced and Bill has had three marriages of varying success. Ken and Deirdrie have each had four weddings and Kevin three. I've no idea, however, if Eileen ever actually got round to marrying Alan Igbon and/or the bloke who played Todd's father, or just got knocked up by each of them. She may be the heroic exception.

With the scandalous demise of Tyrone and Molly, there now doesn't seem to be a marriage on the programme that is entirely stable and involves two people who have never been wed before, given that the Windasses, it turns out, are a common law couple and Roy and Hayley's marriage is figurative rather than lawful. Dev and Sunita's impending reconciliation doesn't hide their previous divorce and Dev's attempts to marry two other women in the interim. Yes, there's John and Fiz, but he's a childcatcher who married her from prison. It's hardly a base for stability, is it? The shadow of Jack and Vera Duckworth's nuptials still hangs...

I only watch EastEnders under protest these days, and very often will leave the room and not bother. However, the marital record of Ian Beale is astounding. He is in his early 40s and has snared and then lost three different women (two of whom were seriously good catches for such a snivelling wretch) and is, presumably, going to the lose the latest one before long. Elsewhere, the inbreeding is phenomenal. Pat's stepson is about to marry her grand-daughter for the second time, having also previously married the daughter of her husband's future wife. Another stepson married her step-daughter. Pat herself has four marriages behind her. And given that I watch the programme only casually these days, heaven knows what I've forgotten or don't know about.

Crikey. It's enough to make you celibate.
Authored by Matthew Rudd
Email ThisBlogThis!Share to TwitterShare to FacebookShare to Pinterest
5 exclamations of response