"Mark and Lard had an actual shed in the studio..." 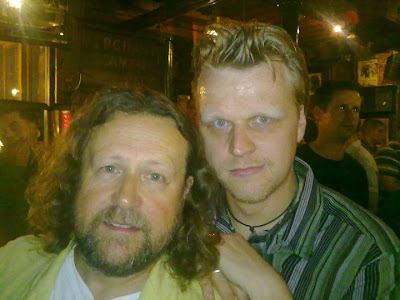 Alex and I on the latest Nerd Night, which we spent in Liverpool. I immediately must confess that I went into this first ever, for me, night on Merseyside's tiles with a certain measure of prejudice and trepidation. I emerged blinking into the morning after with nothing but a sense of what a fantastic time I had.

It became a 25-hour day for me as I had been up since 3am on the Friday morning due to breakfast duties in Manchester. The show ended at 10am and I did some off-air stuff at the studios, then headed to Stockport to leave my car at the nightclub before catching my train to Liverpool.

Upon arrival at our hotel, which was a branch of the Ibis opposite Albert Dock, we were confronted by the spectacle of 25 or so very loud, very heavily greasepainted and very, very Welsh ladies who, according to the legend on the rear of the shocking pink T-shirts all sported, were partaking in "Leah's Hen Night". Leah then emerged in a fat suit (yes, we all did the gag about whether it really was a fat suit) covered in L-plates. And to think stags and hens force this humiliation on the central character because they are friends. Your worst enemy could turn up at your last night of freedom and you wouldn't notice.

They were loud but generally didn't attempt to mingle with the other guests, which came as something of a relief from the rather frightened array of men from the radio industry that gathered, one by one, in the hotel bar. Leah and her cronies were still drinking and singing as we retreated into the Liverpool evening and crossed over to our restaurant.

This was a smashing place called Gusto, though they did give us a long rectangular dining table which meant that 17 people could not enjoy a limitless conversational possibility that comes with a large round table, which we've been given at previous events. The food took an age to arrive but once it did it was excellent, and I showcased my authentic Yorkshireness when asked to contribute 24 quid to the bill despite my decision to eschew both starters and desserts. I had only had an eight quid pizza and had to stamp my foot.

Alex, of course, was the centre of attention, as ever. Having just returned from his third trip across the United States of America (blog here, please read!) he told and re-told his best stories while wearing a lime green jacket, denim shorts and the famous sandals that he had been forced to purchase mere days before flying out to the States after his trusty pair of many years' vintage had bitten the dust just as he needed them most. But, of course, the photograph gives away his most radical image change, as he followed the tradition of 50-something men on holiday of seeing what they looked like with a beard. The comparisons with Justin Lee Collins were not entirely without reason, though it took a while before anyone dare put it to his (hirsute) face.

From the restaurant we took a brisk stroll through the city towards the alleyway where the original Cavern Club was housed. Such is the obvious pride Liverpool has in the Beatles that small reminders of their heritage are scattered throughout the city, and so much of the conversation on this walk was about the Fab Four. Three questions emerged:

1 - Are there any Scousers who actually dislike the Beatles, or football, or both?

2 - Is it ideological heresy to claim that the Beatles were capable of writing the odd dud?*

3 - Was the B-side of Day Tripper really called Oh Fuck This?**

I've never seen the Cavern Club or any of the adjoining bars and the memorabilia. I loved the big statue of John Lennon leaning on the wall. We didn't enter any of the bars though as the music was way too loud for our conversational requirements, until we found an Irish bar which didn't quite tax the ears so much. Interestingly, not one of the bars on this Beatles-based lane was playing a song by the Beatles.

Our three Liverpudlian pals put their heads together while we stood in this Irish bar and soon we were piling into cabs and heading off. We ended up in the bar below the Everyman bistro and this fitted the bill - open late and with just background music. There we stayed until 2am and then it was back to the hotel where, not for the first time on a Nerd Night, the all-night bar we had been promised did not exist.

A quick stroll to an adjoining hotel got us a further drink, and the walk was made all the more passable by our collective attempt to parrot the words to One Week by Barenaked Ladies. Nightcaps of JDs and vodkas were poured and the marvellous Simon Green took the opportunity to show a bunch of female guests his outstanding - in more ways than one - Mancunian stomach. That was the cue for a walk back to our own pad and a much-needed kip.

I got into bed with vodka-induced indigestion at 3.45am and was alerted by a voicemail an hour later telling me about the windscreen. Suffice to say, the 9am alarm call was not greatly welcomed but I staggered down to a particularly poor breakfast nonetheless before heading back to Stockport to deal with the car.

People assume that all we do on these evenings is talk about jingle packages and studio desks and playout systems. The expression Nerd Night was coined by Alex and willingly embraced by us all, but it is a bit of a myth in reality. It's a chance for people in a brilliant but insecure industry to meet, network, catch up and have a laugh. They'll never stop.

Liverpool has benefitted from an amazing refurb and is one of the tidiest and cleanest cities I've ever seen. It was absolutely terrific. I was also impressed that, aside from shocking pink hen nights organised by non-locals, the women in Liverpool dress properly for a night out. Proper frocks, glamorous shoes, walking in a straight line, with no sign of a chavalanche, a lack of belt-like skirts and an absence of vomit on the pavements. Fair play to the place and its people. I'd only ever seen Stanley Park and two football grounds before.

Greeny is taking us round Swindon next. Expect a photo of Alex and I on that roundabout.

* I don't like I Want To Hold Your Hand and never have.
** Yes, I know it was a double A side with We Can Work It Out. But as we discussed the possibility of the Beatles recording rubbish songs, one of our group uttered this outburst in protest at the length and speed of the walk. The two just fitted well.
Authored by Matthew Rudd
Email ThisBlogThis!Share to TwitterShare to FacebookShare to Pinterest
1 exclamations of response

I left my car in Stockport on Friday night while away on the Nerd Night in Liverpool (blog on that soon). When I got back, this is how the back windscreen looked. 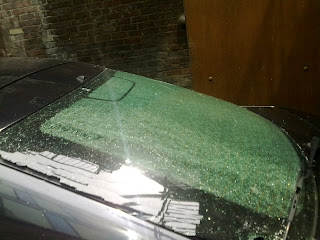 Fortunately, though not until many arse/elbow identification issues had been resolved, Autoglass decided that, having taken my £60 excess from my insurance prior to refusing to carry out the work, they would be willing to replace the glass after all, which was big of them. Every time I have opened my boot since I have heard the rattle of tiny shards cascading down and around, though God knows where exactly they are as the car looks fully vacuumed.

Once the work was done, I nipped into McDonalds (Bill Hicks: "I'm not proud of it - I'm hungry") and while waiting for my order, noticed the charity box that all branches have welded into the serving areas. 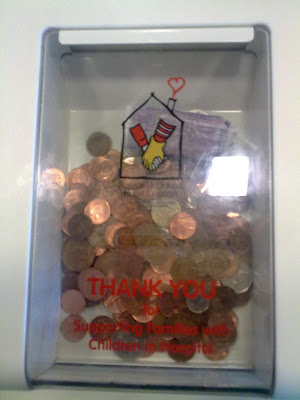 Now, we could simply have a fantastically generous person in Stockport. The cynic in me asks why someone so flush is eating in McDonalds; and then I began to hate myself for suspecting that this £20 bill was added to the box in a state of intoxication. Either way, I've never seen anything like it before. We can all sponsor someone £20 to wheel around Papua New Guinea on a segueway, but I've never known anyone stuff that amount of money into a charity collection receptacle without a question asked.

I'll ditch the cynic's act and say well done, whoever it was. Any chance you can lend me £60 for my windscreen?
Authored by Matthew Rudd
Email ThisBlogThis!Share to TwitterShare to FacebookShare to Pinterest
1 exclamations of response