A firm that lays new driveways has been working on four separate jobs in my village over the last few months. And in these hard times, fair play to them for that.

Their sensible marketing policy means that while their workmen dominate the village, they have been putting company signs up against random walls and lamp-posts all over the place, and for quite a long time now I have passed a handful of these signs while walking the dogs.

I have a problem with the sign, though. And it's my problem, not theirs. There is nothing incorrect about it, after all. Take a look... 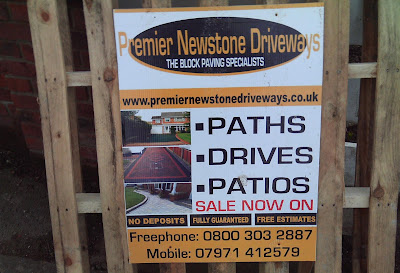 But every time I read it, I suffer from an inability to recognise the word 'patios'. Due to the presence of 'paths' further up, I still have that word implanted on my brain as I read downwards and so I keep thinking the bottom buzzword is 'pathos'.

Now, I have many flaws but I'm not daft when it comes to reading. The only word I ever spelled incorrectly in my junior four spelling tests was 'delicious' (I missed out the second 'i', and am still irritated by it to this day). When I was five, I could read anything put in front of me, even though I couldn't necessarily understand it. My mum delights in telling a story of how I confused my infant one teacher with my reading abilities. Mrs Marshall, for it was her, claimed she could give me her copy of the Guardian and I would read every word but wouldn't know what I was reading at all. I don't profess to remember this, but if her 1978 issues of the Guardian included passionate defences of Callaghan's government I'm not sure I'd understand it at nearly 38, never mind five.

So what is making my brain say 'pathos' instead of 'patios'? It's a warped form of word association, clearly. Maybe it's illiteracy, dyslexia or just plain stupidity on my part but I'd genuinely love someone to give a scientific reason why every day my head replaces an 'i' with an 'h'. It could be akin to those word jokes you can play which involve spelling 'shop' and then immediately asking what to do at a green traffic light.

Maybe these builders can lay a driveway in a way that tugs at one's heart strings, in which case 'pathos' could easily be the correct word and just misspelled on their signage. Or maybe I need to walk the dogs somewhere else for a bit.
Authored by Matthew Rudd
Email ThisBlogThis!Share to TwitterShare to FacebookShare to Pinterest

Does this only happen when the 'i' in question is immediately preceded by a 't'? If so, your brain is misinterpreting 'ti' as an 'h'. 'Patios' becomes 'Pathos'. Whether the origin of the problem lies in the brain or in your eye is anyone's guess...a good neurologist would probably know. An MRI scan would set you back about £400, if you really want to splash out.

Oooh crikey, no thanks ISBW. I'm not quite as concerned as that! I'm interested in the science behind it but not so much as to think I actually have a neurological problem.

John, I'm sure you now know who to call when your driveway needs a touch-up.