Virgin on the ridiculous 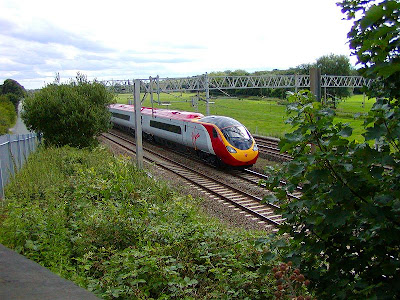 Oh I feel awful for this in some ways, but I really don't have much sympathy for the family being pursued through the courts by Virgin Trains over an argument about using the wrong train for their tickets.

I enjoy travelling on trains and, with the current price of fuel, try to do so where it's feasible (as soon as they come up with a weekend 4am service from Manchester to Hull, I'm booking a season ticket). But when you buy tickets in advance, you should always know whether you're restricted to a particular train.

This family knew they were boarding an earlier train to the one their tickets restricted them to. I heard the woman complaining to Adrian Goldberg on Five Live on Sunday night about it, but ultimately all she could say to justify it was that she was told it would be okay to get on this train by a guard on the platform wearing Virgin garb. I found myself looking at the radio (as you do) and asking whether this member of Virgin staff had come forward, or whether she'd gone back to Coventry station to see if she could see him. Or, given that this is now an expensive legal case, whether she can access CCTV footage of the platform to back up her tale.

They got on the wrong train - not accidentally, but willingly. It's not as if they'd missed the "correct" train, as that was 20 minutes later. I don't agree entirely with the system as far as penalising people is concerned, but the rules are there and they should have paid up.

That said, I'm surprised they were allowed to go all the way to Euston, thereby completing the journey. When I boarded the wrong train in Stockport once (I made the mistake of not checking my ticket; turns out it was only for trains of a specific company) I was kicked off again at Macclesfield and had to start again - and the train didn't even normally stop at Macclesfield. I can only assume there were no more stops between Coventry and London on this one, or the guard wasn't so unsympathetic as to make three people get off at Milton Keynes against their will.

For all this, Virgin don't seem to be handling it well. Sending threats by letter to a 14 year old boy is way off beam, and now it's up to nearly six grand as far as their claim is concerned. This isn't going to do their PR an awful lot of good, but they seem to be up against a stubborn family who won't accept that they got anything wrong at all. They may end up getting away with it - and it may set a legal precedent about the whole 'advanced fares' system too.
Authored by Matthew Rudd
Email ThisBlogThis!Share to TwitterShare to FacebookShare to Pinterest

If the train was empty I can't see it making a lot of difference; as long as they weren't sat in anyone's reserved seats. It's like the guy who was fined for getting off one stop before the destination on his ticket. What's that all about? I know it's been done before, step forward Tom Wrigglesworth, but you can always pen an open letter to Lord Richard of Branson.

The exact same thing happened to me a couple of years back - a Virgin staff member on the platform looked at my ticket and directed me towards the 'wrong' train, and another (very arsey) member of Virgin staff threw me off said train. So I believe them.