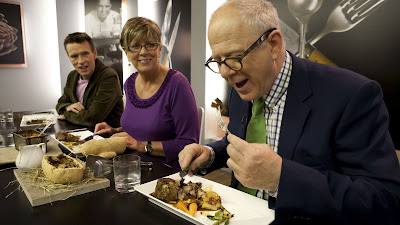 Great British Menu is back and I love it. This year the chefs are trying to impress the judges with dishes designed to cater for a summer street banquet.

We're on the North East heat first - which will irritate people who live in the actual north east as the three chefs competing are all based in Yorkshire - and so far they've done themselves proud with the amount of cliché, rhetoric and pointless drivel told to the camera while they prepare their dishes.

This, despite sounding like a weakness, is one of the strengths of the Great British Menu. If you think the guff that Wallace and Torode come out with on Masterchef is amusingly vacuous, it's nothing compared to the patter from the chefs and the narrator on this programme. Like any cookery programme, it suffers from having nothing to say during the process of preparing and cooking the actual food. It's like a catering equivalent of all the National Lottery shows down the years - all you want is for them to draw the numbers and see if you've won; on this show, all you're waiting for is the prepared dish. Sure it's interesting and necessary to watch the method of creating the dish, but unfortunately there are no original phrases to accompany them. The producers think we're better off watching with pointless narration rather than in actual silence. I love that. You can play a game of "Cliché Watch" with your viewing companions and see who gets pissed the quickest.

Nigel Haworth, Lancastrian chef and former winner on this programme, is the judge and he too has become amusingly predictable. He's very strict with the three competitors and during the tasting process, just asks them all the same question over and over again: "Do you think this is good enough for the banquet?" One day, a chef is going to say: "No, it's bollocks as I've overcooked the fish and not added enough coriander, and I should've chucked the whole thing in the bin and started again." And the producers will cut it out and insist on a re-take.

Replacing Jennie Bond as the v/o has been a good idea too, as I've always felt she was on too much of a jolly in television after retiring early as a BBC journalist. Wendy Lloyd, former Radio 1 presenter, is now doing the "Stephanie is running out of time and still hasn't chopped her asparagus" shtick and sounds great for it.

Those fish stews looked good yesterday. My money's on the Rudding Park lass to win this week, and for a number of people from Northumberland and Tyne & Wear to write to the Radio Times about the geography issue.
Authored by Matthew Rudd
Email ThisBlogThis!Share to TwitterShare to FacebookShare to Pinterest

What always gets me is how the 3 judges get their free nosebag,and then proceed to pick at it and make snide comments.I'd love to get that pillock in the Corduroy jacket in a kitchen making Bacon butties for 40 hungry brickies..and see if he could hack it.

I tell you what...next year I think we should make them something that represents East Yorkshire...Pattie,Chips & Peas a la Bob Carver sounds right.

I much preferred it when Jenny Bond did the voice over. It all sounds so rushed, less about the food, and more about the competition with Wendy Lloyd. Of course the BBC may prefer it that way. Personally, as a viewer, I don't.