It's the end of the world as we know it 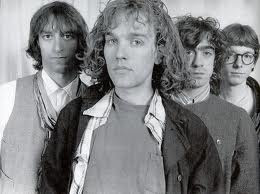 I'd love to blog about R.E.M. and their demise, but I don't really feel I have the clout for it. Though they were formed at the start of the 1980s, they're not some chuckaway 80s pop act whose very existence needs the likes of me to justify. They're far more important than that.

All I know is that a pal of mine started a small but intriguing Twitter debate which suggested that the USA, with the exception of the Beach Boys and R.E.M., didn't tend to produce "good" bands. One assumes the criteria includes longevity, statistical success, worldwide appeal, continued credibility as tastes change and a generally good reputation that combines musicianship with a spot of devilment. When you give it some thought, he isn't far wrong.

I think R.E.M. may lack on the devilment front - the nearest they've had to scandal or an off-diary story is Peter Buck getting pissed on an aeroplane and being acquitted of any further wrongdoing afterwards - but otherwise they've been as good an American group as any since the Beach Boys. They're outstanding composers, professional performers and yet when you read their interviews or sleevenotes, their seriousness doesn't ever come across as pomposity or self-absorption. If the Americans ever adopted a class system like ours, Mike Mills would be the ultimate middle class American.

Ultimately though, I just care about the songs. Find The River is their most exquisite single composition of all. Finest Worksong rocks. Crush With Eyeliner is brilliantly scary. And, of course, people will always think of Losing My Religion, a song that has never really suffered in the UK for being what our beloved radio industry thinks is pretty much the only playable song the band have ever produced in 31 years.

I've never been one for live gigs, more fool me, but R.E.M. are one band I always thought I would go and see play one day. I hope there'll be a reunion tour in five years or so because otherwise I'll spend the rest of time kicking myself that I didn't take up an opportunity go along. With my musical tastes, they're the nearest I've ever got to liking a band that "proper" music fans like, and the quiet arrival of a new, polished R.E.M. album every three years will soon be missed.

Not allowed to embed Losing My Religion at the moment, so have a gorgeous bonus track - the one that tried to emulate those very Beach Boys mentioned here...

I went to see them at Huddersfield when they played with Beautiful South, Echobelly and Terrorvision. Went with Selby travel and they had a quiz or draw or summat on the coach to win the Parallel video. And we won! However...when we came out to walk to the coach park we went the wrong way and walked for bloody ages getting more and more lost. When we eventually got to the coach park the Selby coach had gone. And the last coach was just pulling out. It was a Good News Travels from Hull and we pleaded with them to take us back. I gave the driver a fiver as it was all I had left. Gotta love the God botherers.

You pal makes a good point about U.S. bands - I've always thought their strength was turning out performers rather than groups.

R.E.M it was a surprise to hear they had split, mostly as I thought they'd retired back awhiles