"Well at least you're not Ann Widdecombe, dahhling..." 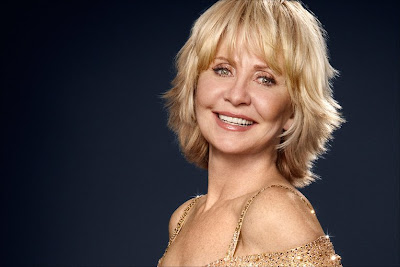 I'm a Strictly Come Dancing junkie, as you may be aware, and so I'm fairly pleased with the line-up, as announced yesterday, though it isn't instantly as impressive as last year's. But it's also a predictable 14 in that it carefully fits every category the BBC needs in the ratings war.

Footballer? Check. And it helps that he is also a BBC darling (inexplicably, to many) in his new career.
Youthful pop star whose band aren't as good as they were once were? Check.
Ageing pop star that still looks okay? Check.
Retired (ie, failed) politician known for courting controversy? Check. And I really hope that Craig Revel Horwood reminds her, on live television in front of millions, that she indulged in a few harvest festivals with John Major.
Glamorous soap star of yore? Check. Any excuse to bring out the Kiss Kiss video.
Soap royalty of yore? Check. No excuse whatsoever to bring out the Anyone Can Fall In Love video. Assuming they dared make one.
Current BBC A-lister? Check. Just so they could announce the line-up on her show.
Token unheralded star of BBC show that needs the publicity? Check. This year it's Waterloo Road's turn.
Person from flagship ITV show to guarantee promotion from rivals? Check.
Person from commercial radio to guarantee promotion from rivals? Check. Though as Heart isn't (mercifully) any more than a quasi-national brand, it'll be the Lisa Snowdon syndrome all over again to some of us.
Macho sporting beefcake who "needs" to "discover" his "softer side"? Check.
Obese person who will treat it as a weight loss experiment? Check. And there will be endless gags about how he should be able to predict how far he gets in the competition.
Famous for association with someone far more famous? Check. Again, good telly will come from a judge daring to mention Sven and Ulrika at some point.

The genuine exception, to me, is Rory Bremner. Comedians have been largely under-represented on the programme over the years. Jimmy Tarbuck only lasted a week before he had to bow out with a dicky ticker, and nobody thinks he's funny any more anyway. Pamela Stephenson made a point frequently last year of reminding people of her psychological credentials, even though most of us would rather recall that American Express sketch. The recruitment of Bremner feels more like a celebrity fan of the show pushing for an appearance than anything else. Unless he genuinely feels he needs the exposure, or is bored of doing Geoff Boycott take-offs on Channel 4.

The only thing to ponder now is which useless article is going to be forced on to Anton du Beke this year.

It starts on Saturday, and I'm especially looking forward to how Bruce Forsyth will handle the inevitable plugging for Twitter accounts and hashtags, a la Dimbleby on Question Time. Perhaps he'll cock it up once, throw a hissy one behind the scenes and insist Tess does it from then onwards. And when you think of how many errors he made last year, it's quite staggering that he's still presenting the show. I also expect there to be a standing ovation when his knighthood is mentioned for the first time.

And my early hunch is the soap royalty of yore will win. This is opposed to the glamorous soap star of yore, who I've just mentioned again as, er, an excuse to bring out the Kiss Kiss video.

And I've checked. There is no video for Anyone Can Fall In Love.
Authored by Matthew Rudd
Email ThisBlogThis!Share to TwitterShare to FacebookShare to Pinterest

I'm not a fan per se - I'm X Factor - but I do think it's one of the better lineups of recent years.