I don't do movies at all, but in the process last week of going through the latest cinema releases for the benefit of radio listeners, I noticed something that interested even me.

Don't Be Afraid Of The Dark is a new movie now showing somewhere near you. Check local press for details, and all that. It stars Katie Holmes and, among others, Guy Pearce and Alan Dale.

Or, if you prefer, Mike Young and Jim Robinson. 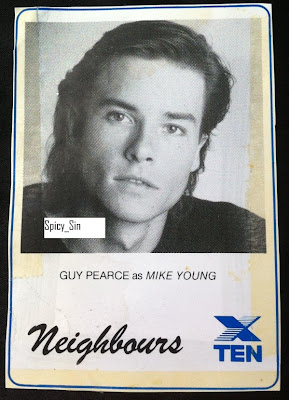 I watched The King's Speech on DVD earlier this year and enjoyed Guy Pearce's turn as Edward VIII. I knew that he'd made it in Hollywood after leaving Ramsay Street, but as someone who held the tiresome - and, rather insulting - received wisdom that all Aussie soap actors were somewhat limited in their abilities, I assumed this was a one-off. 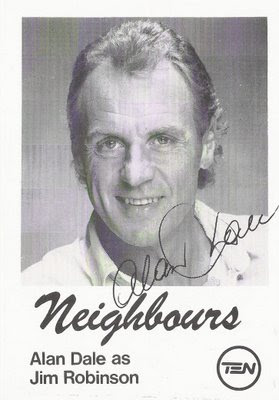 But Alan Dale too? Well, of course, he made it on telly in America with Lost and The West Wing after Jim Robinson suffered his final, melodramatic coronary, but even so, seeing these two former budget telly colleagues next to each other on a big new film that presumably the world will watch is somewhat quirky. And, while it may not necessarily endorse Australian soapland as a major breeding ground for global acting greats, it certainly enhances what has always been a rather demoralising reputation.

Simultaneously, Jason Donovan is the bookies' favourite for Strictly Come Dancing (more on that another day). Kylie Minogue and her little sister are still pop superstars with occasional diversions into reasonable acting roles when they feel like it. I expect there are numerous other actors from that background now doing very nicely indeed both in terms of their work and their reputations.

For me, undoubtedly without any fairness at all, the Aussie soap will be associated with hams for as long as that scene where Sharon Davies, trying to slim into model shape by just Not Eating, fainted into the swimming pool with all the natural grace of a giant redwood getting stuck mid-fall on an obstinate twig, remains in the memory. My father's incredulous snort when that scene was completed will live with me forever.

None of this suggests that Don't Be Afraid Of The Dark is any good, though as the lead role is played by a child, it will probably receive some kind words, irrespective of what is merited. The sequel, Still Don't Be Afraid Of The Dark, Cobber will feature comebacks for Kristian Schmid, Ashley Paske and Lucinda Cowden. And there will be an offscreen role for Len Mangel, obviously.

EDIT: I've found it! This is Neighbours legend, this, right up to the bit where Bev gives the lecture about not "paying too much attention to the images promoted in advertisements"...

i read something the other day about Kristian Schmid, that he's in Australia's top show, whatever it is, now.

Wonder what happened to Sharon and Bronwen?

It's a crying shame that my ultimate Neighbours clip isn't on You Tube: Daphne going into labour on a riverbank whilst still wearing a pair of electric blue tights.

Who was Hilary, and who gave her that spectacular medieval haircut? She looks like she ought to be grimacing from the top of a pillar outside a cathedral.

There's a great YouTube clip of Josh kicking the shit out of short-lived bully-du-jour, Boof, here. Go Josh! He was so hard, no wonder he made a full recovery from his temporary blindness.

...and I should also say that Joe Mangel was my all time favourite.