It actually says: "Welcome to Barbados, have a nice day..." 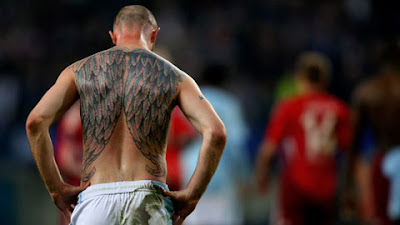 "To you it may be taboo to boo the tattoo; but for me the tattoo is something to say ta-ta to..."

When you watch a Premier League match on telly now you see an array of artistic images burnt into the flesh of the players. There has been quite a rise in the prominence of the tattoo in recent years, possibly as a direct consequence of these chaps.

How do they cope with the pain? Given that some have a penchant for rolling around in agony for ages when an opponent exhales on them, it's quite remarkable to consider that they can sit for several hours in an artist's studio while needles dipped in a combination of ink and molten lava are rammed under their skin.

Players who choose to wear short-sleeved shirts show off their forearm pictues and patterns; those who take their shirts off entirely for any reason are often sporting serious artworks on front, or back, or both.

As for me, nope. Not on your nelly. I expect I'm in only a small majority of tattooless people of my generation. I don't have kids, so I don't have the motive for a tattoo that many people choose to use. But now there is quite the number of people who have their kids names, or some Greek proverb, or an oriental bon mot, branded into some area of their anatomy. And I have both admiration and a touch of pity those who have the patience and pain threshold to sit down, keep still and bite on a wooden spoon while their artist of choice imprints an image of Enceladus or Selene, sitting proudly on a rock while holding a staff and shield, into their back.

Admiration for the nerve and commitment, and pity for when the day comes that, for whatever reason, they regret it. Usually this applies with ex-spouses, doesn't it? You're asking for trouble the moment you imprint a partner's name indelibly into your skin.

The stories about tattoos are well-thumbed, aren't they? The woman who thought it would be amusing to have a No Entry sign imprinted in the very base of her back. The Geordie who had a complicated, agonising, detailed tattoo of Andy Cole put into his torso 24 hours before Newcastle United sold him to Manchester United. The woman who had a cartoon image of Kelly Holmes crossing the finishing line tattooed into her back, only for the tattoo artist to forget the letter 'l' in the athlete's name.

And I can say this as a chap who can recognise a good-looking guy without any question marks over sexuality, but that thing on the back of his neck has ruined David Beckham.

(I assume you recognise the punchline in the title of this blog...)
Authored by Matthew Rudd
Email ThisBlogThis!Share to TwitterShare to FacebookShare to Pinterest

David Beckham will one day spend a fortune getting rid of those tatts. There are far too many, they look all murky and grey and they will date really badly.

Those whole arm sleeve ones are the worst. They'll go the same way as the celtic cross, Chinese character and barbed wire - all looking v dated now.

People get addicted and can't stop. And nine out of 10 cone to regret it.