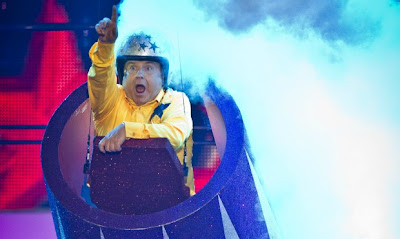 There was no voting scandal in the end as, finally, Russell Grant bid farewell to Strictly Come Dancing. He had been entertaining, willing, self-deprecating and humorous to the limit, but the timing of his exit was spot on.

His now familiar position at the bottom of the leader board was cemented by a public vote that the programme actually seemed to cock up in using its "no particular order" policy for announcing the results. The two participants immediately above him - Robbie Savage and Anita Dobson - were the first two to have their safety confirmed, making the eventual confirmation of Grant's exit something of a non-event. Ultimately, it was the clinical Aussie plaything Holly Valance, fifth of the eight, who stood beside him as the other celebrity in danger and although one wondered briefly if we were about to witness a genuine outrage that would have surpassed anything Ann Widdecombe's shtick last year attained, the result was obvious.

Len Goodman said, not entirely without a menacing tone, that we'd remember Russell Grant flying out of his camp cannon for years to come. He was right of course, but I thought it was a dreadfully executed stunt. A potentially great idea ruined by the desire to make spectacle outweigh substance. That Grant emerged very slowly and with his belly attached to some kind of protective toboggan made it all the more pointless. He then landed on the deck and proceeded to parade and point rather than dance, something which even a man of his limited abilities had admirably managed to avoid in previous weeks. He and his partner thought about the setting - Wembley Arena, 6,000 people - far too much, and forgot about the contest.

From his point of view, that was a pity, because there were enough weaknesses in his nearest rivals to give him half a prayer of surviving another week had he done a better job. Savage isn't improving enough and cannot convince the judges at all; Dobson is only as good as she was in the first fortnight, which is a real worry for her; Valance has ability but doesn't seem remotely emotional about it at all; and her Aussie compatriot Jason Donovan is in danger of seeing his considerable chances ruined by his own intensity. His missing steps within a jive that had been built up and built up by others as potentially one to ape the Halfpenny standard of seven years ago could be the starting point of a breakdown before our very eyes. His perfectionism and professionalism is proving to be part of the problem rather than the solution. He needs to lighten up.

Still, all of the aforementioned remain, and Grant has gone. With the comic relief confined to the audience from now on, the competition again can restart, just as it did when Nancy Dell'Olio got the shepherd's crook three weeks ago. The remaining septet are all winners in the making, but right now only Harry Judd is obvious. Chelsee Healey is hot on his trail and the surprise package Alex Jones needs to be taken seriously - in the past slowburning improvers like Darren Gough and Chris Hollins have overwhelmed more instantly gifted rivals to peak just at the right time. It helps that Jones has come across as witty, humble and affable, attributes that we had not been previously able to see from someone whose national profile had been 100 per cent in front of an autocue.

As for the show, it just didn't work. Of course, it was fine for the crowd packed into Wembley Arena, the admission fees of whom had contributed a six-figure sum to Children In Need, but for the dancers and television viewers - the two most important sectors in all this madness - it wasn't good. The floor was too big for some of the less fit competitors while we at home were forever seeing crew sneaking around while hearing bad echoes and wrongly activated microphones. For what it's worth, however, it did seem to be one of Bruce Forsyth and Tess Daly's best performances as a presenting team, and the main man himself has been much less prone to error in general this year. And Bruno Tonioli really, really made me laugh.

I keep changing my mind, but at the moment it's a brave person who backs anyone other than Judd or Healey for the title. Much will depend on whether ultimately they have the personality to match their dancing, deficiencies that have done for other competitors at the last minute in the past. The biggest personality has now gone, but he wasn't a dancer, so now on likeability we're looking at Dobson and Savage. The best dancers are lacking personality and profile, while the best personalities are lacking as dancers, so maybe someone in the middle - someone who can combine a bit of ability with a smidge of character - has a better chance of winning this thing than they realise.
Authored by Matthew Rudd
Email ThisBlogThis!Share to TwitterShare to FacebookShare to Pinterest