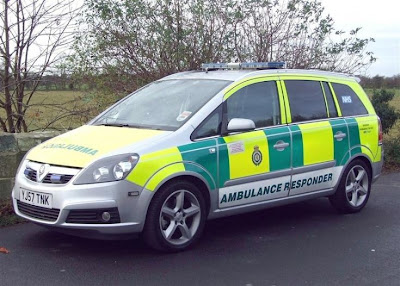 Friday has started with a rare feeling of human achievement. Driving away from the gym (a place where I seldom feel human achievement), I edged round the final corner and came across a moped rider flat out on the concrete.

Quickly I got out of the car and remembered one of the few episodes of Casualty I'd ever watched - "have you hurt your head or your neck?" I asked. The answer was a very pained no - and so I asked the rider to remove their helmet.

The injuries suffered by this girl - and she was a girl, 17 I reckon - were two heavily gashed knees and some severe, severe embarrassment. I applied tissue to the heavier of the cuts while another motorist who'd just turned up was calling 999. I then lifted her into the back seat of my car so she could sit up properly and then shifted her bike, then we all waited for the ambulance.

The operator seemed to have no access to Google Maps, or common sense, or sympathy, given that he was still asking me for a more precise address in a featureless voice when the bloody ambulance itself actually turned up. The communication system in that avenue of the emergency services needs a bit of work, really. It was one of those Ambulance Responders, the type you mistake for police cars all the time, and the burly bloke inside had a bedside manner ("I had a knee like this after crashing my go-cart", "you'll get a scar your boyfriend will be proud of") that made this lass smile and blush simultaneously.

Then a "proper" ambulance turned up, containing two more burly blokes. They cracked weak but reassuring jokes and then the three of them lifted her into the back of the ambulance as her parents arrived to check on her welfare. I'm assuming this girl was arriving for sixth form lectures - the gym is tagged on to my old school - and instead found herself being given medical treatment by three men. She's got a story to tell to her mates.

Anyway, my work was done. She couldn't look me in the eye once her helmet had come off - teenage pride and deep embarrassment over the fuss - but I think she was grateful. Teenagers, eh?