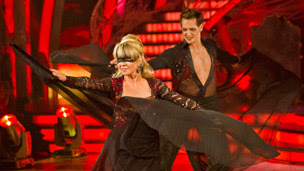 I still don't like Lulu very much, but there is something brilliant about watching a Scottish 1960s diva, dressed as a bat, flying through the air prior to doing a Spanish bullfighters' dance with a prickly New Zealander as a BBC orchestra and classically trained session singer perform Highway To Hell by AC/DC. That alone explains why Strictly is storming the ratings.
Authored by Matthew Rudd
Email ThisBlogThis!Share to TwitterShare to FacebookShare to Pinterest