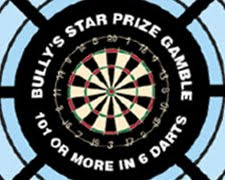 I've taken to watching repeats of Bullseye on Challenge, and it seems I'm not alone. They occasionally trend on Twitter - I'm guessing via drunk people thinking they're being ironic - and the odd newspaper TV critic has commended Challenge for putting them on.

They are such fun. Yes, it's easy and unoriginal to laugh at colour tellies "with remote control!" and some of the bespectacled muddlers in the contestants' chairs who think that anthracite is a freshwater fish. But it was actually a nicely honed quiz, with a host who seemed to genuinely care for the contestants, and for all its cheapness on set, contestants often went home with several grand in cash and goodies.

I worked out last night that the most a duo could win in the opening Categories round of Bullseye was £1,140, which is a lot of money now, let alone from 1981 onwards. I very much doubt anyone ever managed it - it would have relied on the thrower to hit three bullseyes and his or her partner to answer all three of their questions correctly, rely on the other two to be wrong on every answer they gave, and then know the answers to their questions too.

Perhaps it was the stinginess of ITV that prompted the change in the rules midway through the run that meant that the winning duo had to gamble away their money as well as their prizes when it came to getting 101 or more with six darts. Initially it was just the prizes that were at stake. Also, it wouldn't surprise me that when auditioning contestants, they chose ones whose dart players were mediocre, as opposed to really quite good. There were a lot of 41 and 26 scorers over the years. And I'd love to know if there was ever an episode where all three duos refused to gamble for the star prize, leaving Jim to just reveal the fully-fitted kitchen or holiday to Lanzarote that nobody wanted.

Anyway, they're worth watching in a totally appreciative, unscathing way. And a mention for Tony Green, whose kids and grandkids probably thought him the coolest guy on earth when his Bullseye exploits got him a cameo on Newman And Baddiel In Pieces.
Authored by Matthew Rudd
Email ThisBlogThis!Share to TwitterShare to FacebookShare to Pinterest

Yes, there have been occasions when everyone refused, it plays out exactly as you believe it would, with the last pairing still on set.

That rule change coincides with a new production company making the show too, whether that means anything I don't know.