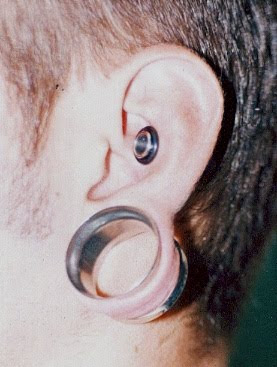 After attending a football match at the weekend, I dropped into a branch of Subway for some sustenance prior to catching my train.

The young chap behind the counter was welcoming and helpful and everything you want from someone serving you in an eaterie. I found it hard, however, not to stare at him just a bit.

Clearly, this fellow had chosen to make a major cosmetic alteration to his appearance, but had gone beyond tattoos. He had decided to not just have his ears pierced, but his ears punctured.

I've seen a lot of people lately, almost always men, with these coloured discs pushed into their earlobes. I can't imagine either the frame of mind of someone who chooses these mutiliative decorations, or the pain barrier they must have gone through to have holes the size of ten pence pieces made in their ears and then a disc shoved into each.

Thing is, however, Subway clearly have a uniform policy, based on either appearance or safety, that disallows any member of staff from wearing this stuff on duty. So the reason why I had trouble tearing my eyes away from this kindly chap wasn't because he had the discs in, but because he hadn't the discs in. He was behind the counter with two enormous holes in his ears.

I thought you were meant to put sticking plasters over them in the event of taking these items out, to avoid infection. Evidently not. They make me wince each time I see them; they remind me of the Amazonian chief with whom Sting was in cahoots in the late 1980s as he banged on about deforestation. I'm not sure what Subway policy is on lip plates, but I suspect it's roughly similar to how they view ear enhancements.
Authored by Matthew Rudd
Email ThisBlogThis!Share to TwitterShare to FacebookShare to Pinterest

I believe the process is to start with a normal piercing and gradually squeeze increasingly enormous plugs into the hole over time. Not my idea of fun though.