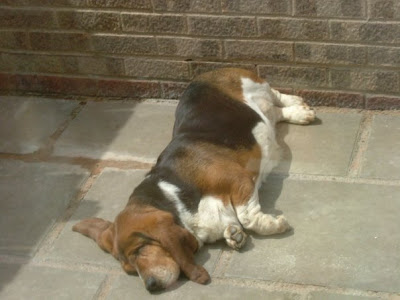 Penny, my big girl Basset who died just over a year ago. It's very eerie in this house each time the More Than... pet insurance advert comes on, as the Basset they use is the spit of her...

This profile shot is especially like her. It's quite comforting actually. I'm contemplating scanning all my archive photos of my big girl Basset to see if one got half-inched from this blog or elsewhere online, and then CGI'd into life.

That wag of the tail is dubious, by the way. And I still have yet to take in the script of the advert. I'm too busy thinking about Penny.

Now, how to get the biggest cat of the house, Harvey, into those Coronation Street sponsor credits...?
Authored by Matthew Rudd
Email ThisBlogThis!Share to TwitterShare to FacebookShare to Pinterest
0 exclamations of response

A Touch Of Glass was the first episode of Only Fools And Horses that passed into sitcom folklore. The punchline of the chandelier crashing to the ground is of the most familiar and reassuring gags, and yet that gag alone acts as not just a stealer of the show, but a saviour of it too.

If you watch the full episode now, you'll see that it is very much short on great gags in dialogue as John Sullivan manfully tries to concoct a sequence of events that would allow this rough, corner-cutting and uncouth family to find themselves cleaning a peer of the realm's priceless chandeliers, with permission, in a stately home, despite the hideous prejudices of the lady of the manor. In order to make sure the story fitted and the final pay-off hit all required heights, the rest of the episode was almost entirely sacrificed.

Of course, when it was first aired and nobody knew what was coming, it was easy to sit back and chortle at the incorrect chimes in the china cats, the ignorance of Del as he tries to comment on his Lordship's art and the brand of grandiose spiel he comes out with to persuade Rodney that getting the dust off a pair of chandeliers is their gateway to Gucci clothes and an invitation to the "Hendon regatta".

But then the chandelier hit the deck and all before was forgotten. Now you watch it as a repeat episode and you can't really hear the jokes. You're waiting for the chandelier to drop. No more.

John Sullivan had the chandelier gag from the off, courtesy of a story told by his father. He had to put it into an episode of his comedy show, which wasn't yet a fully-fledged hit but was starting to make a noise. His dad was livid that an incident that lost many men their jobs was being exploited, but professional judgement took hold and the episode was written. When it aired, the phone rang in the Sullivan household and it was his dad, with the simple words: "Yeah you're right - it was funny."

I think A Touch Of Glass is, dialogue wise, one of the least funny episodes of the programme. But as actors don't count their laughs and see a story as the main factor in a performance, it had to be written and it remains absolutely compelling now. Because of the one immortal gag at the end, it allows you to see a writer's imagination at work, getting from an apparently uninspiring A to an explosive, unique B. It's theatre for the telly and it's brilliant.
Authored by Matthew Rudd
Email ThisBlogThis!Share to TwitterShare to FacebookShare to Pinterest
2 exclamations of response

"Daphne Fowler once won it, you know..." 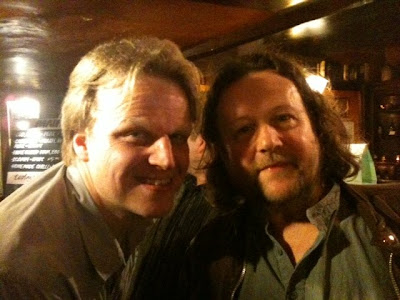 Alex and I on the latest Nerd Night, which took a very easterly angle and ended up in Norwich. It was an exceptional night in what I thought was a very smart looking city.

I've been to Norwich three times before, but only to attend football matches. This means my experience of the place has been a case of get there, get through the turnstiles, get through the game, get out - something that continues to baffle the many footballphobes with whom I choose to associate.

My friend Martin and I travelled together from Manchester on the train. I'd received my call-up papers for Magic 999 breakfast in Preston the day before, and therefore what was already going to be a bloody long day turned into a inhumanly colossal one, courtesy of the 3am alarm call and the cockcrow propulsion across the Pennines this entails. Nonetheless, I was heading in that direction to get the train anyway, and so I went to Preston, did the show, and an hour later had secured my car at the club in Stockport and leapt on the train with Martin.

The Liverpool to Norwich service is, clearly, a long old haul but at least it's direct. Upon embarking in Manchester, we not unreasonably expected not to have to shift from our seats until the train came to its halt, 261 minutes later, in Norwich. However, in Nottingham, we were told that the four carriages were now becoming two, and so everyone in the rear two coaches needed to dismount and then reconvene in the other two, on to which of course a shedload of new passengers had already climbed. So those who'd been on the service for a while suddenly found themselves in a louder coach and not necessarily guaranteed a seat, despite essentially being there first.

In the traditional British manner, there was much staring at the fingernails and grumbling but no actual complaining, and the newly-lightened train rumbled eastwards. When it stopped at Ely, we were told that we all had to get off here as the train was unexpectedly having to terminate. We weren't told why, but there was a half hour wait for the next due service, which, of course, many new passengers were due to get on so, once again, we were prised from our comfort from this allegedly direct service and made to stand on a freezing platform or use the grottiest cafe/waiting room in the history of station facilities.

The upshot was that we changed twice on a direct service, arrived more than an hour later than scheduled and therefore, in my case at least, lost time I'd put aside to catch up on some kip at the hotel. However, I remain comforted that I only paid £17 for my ticket in the first place; Martin, who'd paid slightly more, is chasing his refund right now.

Come 6pm and we started to meet up in the hotel bar. The esteemed Louis Barfe, fragrant and acerbic, was our guide for the night and, as a chap who also knew Alex from professional connections, was quickly into his stride as lead storyteller. Eventually a gaggle of us headed to an Italian restaurant, passing the Anglia HQ on the way.

Now, look. The very mention, never mind the actual sight, of the Anglia brand brings out the same in everyone - the snazzy jingle is immediately sung followed by John Benson's earnest introduction - "And now, from Norwich, it's the quiz of the week!" But the place is iconic, and the Sale Of The Century opening patter follows the jingle as naturally as night follows day. Many of our bunch had original audio on their iPhones, while also choosing to pause upon arrival at the building and take photographs.

We then stopped dribbling, and discussing Survival, and continued to our eaterie where we were greeted by a not remotely bleary-eyed breakfast team from the local Heart station. The meal was mixed, to be honest. The starter was the smallest bruschetta I've ever seen - put it this way, no member of Girls Aloud would have felt compelled to cut it in half and send a piece back to the kitchen if they'd been served it - but the main course was a huge pizza with much chicken and pineapple and all taste. I even had room for a dessert - my mum always says you haven't eaten out properly unless you've managed at least a small pudding. Fascinating. During this munchathon, Heidi the Heart breakfast producer told us she had three Twitter accounts - one for work, one for home and one for her dogs.

One for her dogs, she said.

Now, I have Basset hounds, and they are personality dogs. But I have never considered setting them up with a Twitter account. Yet I was fascinated by the fact that her dogs seemed to have followers and were questioned and retweeted just like any other Twitter type. It's one down, I suppose, from a satirical account - like CatBinLady or KaiRooney - but acceptably so nonetheless. I might look into it. If you see a Twitter account called BassetsTimes3 or something then that'll be from a kennel in East Yorkshire. I'll set up Echofon next to their bowls.

We exited the restaurant, well fed and oiled, and headed for a pub called the Coach & Horses, where the rest of the night would be held. This was where the proper anecdotal stuff that Nerd Night has become known for began, with any number of weapons grade stories, indiscretions and bon mots exchanged. As if to prove that he hadn't changed a bit, our pal John dug out one of Alex's more arcane publicity photos - postage stamp 'tache and centre parting - and compared it with the 2011 model. Judge for yourself.

At 1.30am, we were informed of the pub's closure and, well, that was us spent - several of us had done breakfast shifts that morning and were now pushing a 24 hour day, so we ambled back to the hotel - pausing to discuss Tales Of The Unexpected's opening sequence one last time upon seeing the Anglia lettering again - and turned in.

Norwich is a genuinely easy on the eye place, from what I managed to see, and I even had time for another walk into the city after breakfast the next morning before catching my train away. I recommend it.

Manchester receives us next.
Authored by Matthew Rudd
Email ThisBlogThis!Share to TwitterShare to FacebookShare to Pinterest
1 exclamations of response