Alex, my dear friend and total hero, got married in a gorgeous, ancient East Sussex hotel at the weekend. It was a smashing do, classy and enormous fun, befitting the character of the man. His new wife, Kerry, is of course totally stunning, and it was a privilege to be there. 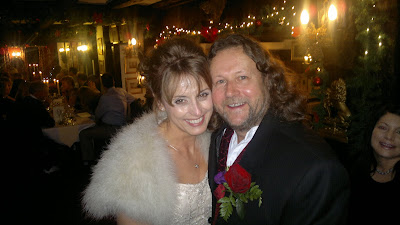 Edwina Hayes sang this at the ceremony and there was a lot of "something in my eye" nonsense going an afterwards...

Alex is now totally loved up and can't stop grinning. But we all agreed that upon his return from honeymoon and to the airwaves, he'll be still a cynical old get, and our favourite cynical old get at that. Congratulations to them both.
Authored by Matthew Rudd
Email ThisBlogThis!Share to TwitterShare to FacebookShare to Pinterest
1 exclamations of response