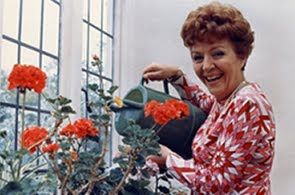 I absolutely loved watching The Unforgettable Noele Gordon last night. Crossroads was deservedly the butt of many jokes but we forget, or never fully appreciate, just how much of a hold it had on the nation in (especially) the 1970s.

Even I watched it. I didn't have a choice, really; the Thursday evening trips to my maternal granparents' house always began with half an hour of "Ssssh!" noises as we usually arrived just as Crossroads was starting. Eventually, beaten into silence, this young lad began to wonder what the fuss was about.

I was too young to read grown-up publications like tabloid newspapers and telly magazines - and we never got telly mags anyway, except at Christmas - but even I knew that "Nolly" had a hold on the nation somehow. She'd travel the country doing supermarket openings and the like, and you'd see her on the news. Only last night did it dawn on me just how individually popular she was when those negatives of her in front of a table full of TV Times awards, which she won each year without fail, were put on show.

The Christmas scene where she breaks into song was hysterical, but I loved the comment from Susan "Miss Diane" Hanson, who said that as Nolly wasn't embarrassed, neither was I. I expect that all this time later, however, revisiting that scene on telly last night was uncomfortable. We got familiar anecdotes about the odd form of crediting on the show, her improvised one-way telephone calls to extend episodes that were too short and those cliffhanging last scenes that ended each episode just before the ATV symbol came up. All very much about Crossroads rather than Noele Gordon, you would think, but it was evident from the tone of the documentary and the comments from her co-stars and associates, that she was Crossroads.

I remember her exit on the QE2 and my grandma's actual tears as both Nolly and Jane "Jill" Rossington cried at the end of her last scene, and the outcry that made the national news. The footage of her immediate interview with Russell Harty was magnificent; she was haughty and confused and angry as she replied with a curt "I don't know!" when he gently asked her why they had let her go. It still seems like the single most pointless sacking in soap. The show divebombed for the rest of the 80s and was cancelled in 1988, by which time Noele Gordon had long succumbed to cancer. When you think of the ribbing Crossroads took, usually using the twin motive of wobbly sets and clunky acting, then firing its one superstar for no apparent reason was essentially killing the whole show. Nobody is bigger than a soap? Noele Gordon was, at the very least, of the same stature as hers.

I watched Crossroads for the last three years or so of its run. I remember with a bit of fondness the likes of Charlie Mycroft, Ann Marie Wade, Tommy Lancaster, the Grice family (one of whom was also appearing in kids' anarchy show Your Mother Wouldn't Like It, which was most off-putting), Mr Darby and the chain-smoking cleaner Mrs Tardebigge, but even still having Jill and Adam Chance there as head couple couldn't save it. Crossroads was essentially handed its notice by ATV when the bosses chose to ditch Noele Gordon, and the show itself essentially died when she did. Last night's documentary was unashamed in making that perfectly clear.
Authored by Matthew Rudd
Email ThisBlogThis!Share to TwitterShare to FacebookShare to Pinterest

I remember when she got axed and it was all over the news and the papers. It was a really big deal.

I hated Crossroads as a child, as it meant we had to go upstairs and watch what we wanted to watch in black and white. But I do have snatched and odd memories of it, some of them quite alarming.

She was a true old-fashioned TV star though. They certainly don't make them like that anymore.