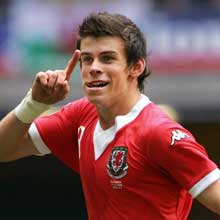 Bit annoyed with Tottenham Hotspur. They pulled Gareth Bale out of the Olympic football squad through injury and then took him on their pre-season jamboree to the USA and played him in a match.

FIFA, with their usual inability to take any decisions for themselves, say that Bale could be banned from playing for Spurs in all games, including friendlies, until the Olympics are over but only if someone - ie, the British Olympic Association - makes a complaint.

I hope they do. Bale is the finest footballer from Wales since John Charles and should have been in that squad. He even posed in the Olympic kit when it was revealed a few weeks back. There should be 100 times the outcry over this than there was over the non-selection of David Beckham. But it's hardly on the radar at all.
Authored by Matthew Rudd
Email ThisBlogThis!Share to TwitterShare to FacebookShare to Pinterest