Occasionally, people ask me if I can DJ at an event that they're having, which is very nice of them. Generally I say no, as I've never been a mobile DJ and don't have any equipment at all, just the music. Plus almost all requests I get will clash with my residency. But I made an exception at the weekend.

Andy and Katie got married on Saturday and I played their music in the evening. They met while both at my regular Saturday haunt in Stockport and, despite both being born in the mid-80s and therefore not exactly "target", became exceptional regulars to the 80s night as their relationship blossomed. Occasionally they came in with a stack of their mates but most of the time just the pair of them, with Guinness, bottles of oddly coloured beverages and lots and lots of dancing.

Any number of years on and they got married at the weekend. As I was the bloke onstage when they got it together, I couldn't say no when they asked if I'd do their wedding evening. It was a privilege to be asked. But the eternal problem remained: what about the gear? Most venues don't have their own DJ gear and their choice of evening setting was no different. But Andy, with determination that flatters me stupidly, patiently noted the stuff I needed and organised a contact of his to supply it. I booked the night off my regular gaff, turned up with laptop, three wallets of CDs and my cans, and got to work.

Their faith in me was immediately tested when, having untroublesomely played background music as the guests began to arrive and get their drinks, the first major responsibility of the night befell me as the lights dimmed, I announced the happy couple's first dance and pressed play. On came Take That's Rule The World and the handsome pairing took to the floor with guests surrounding them, pointing their cameras. All was well for two and a half minutes and I took a few steps out of view to grab my soft drink. Just as I did, there was a buzz in the speakers, then a gap, and then after a brief resumption, the CD stopped and recued itself.

The last time I felt as embarrassed as this was when I said "Party Mix next" on the radio instead of announcing the death of the Queen Mother.

A couple of playful (I think) boos sounded and quickly I started the next CD, which contained their second song of choice - Marry You by Bruno Mars. Playing this man endlessly on the radio has not warmed me to him, but as his song carried through its duration without a hitch and the guests made a circle around the happy couple, I found myself very grateful to him. Subsequently, I played three hours of varied stuff, only cleared the floor entirely once (Dub Be Good To Me, which is usually a shoo-in) and followed instructions to recreate the atmosphere they were used to when on my dancefloor in Stockport town centre. Whatever stance you take, there are still few more enjoyable sights than a group of men of various ages, sizes, capacity for alcohol and perspiration levels, all in identical whistles, waistcoats and cravats, trying to keep up with one another on One Step Beyond. Especially as Katie's mum, shoes cast aside, out-danced the lot of them.

Take That did make a more tangible contribution at the end, as Katie wanted the full six minutes 30 seconds version of Never Forget to finish with. Those who remained when that time came surrounded the pair of them on the floor once again and did the actions, everything. Gary Barlow and his dopey mates had redeemed themselves. I remained mortified in part that the one song - and it was the only one all bloody night - to not manage its duration was the single most important song of the occasion, but the bride and groom - and, perhaps more significantly, the bride's parents - were full of thanks as I packed my CDs away and headed into the night. My last action of the evening was to take this pic of them: 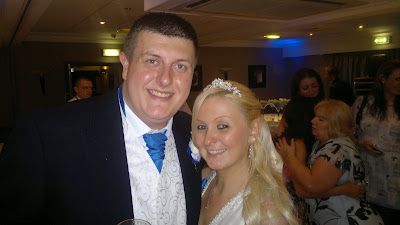 Andy is on Twitter at andywarring1on and Katie is (now) katiewarringt0n - if you get a moment, do tweet them some congratulations - not just for their special day, but for their capacity to forgive...
Authored by Matthew Rudd
Email ThisBlogThis!Share to TwitterShare to FacebookShare to Pinterest

Oh I hate that,the lumpy silence and spotlight on you from an iffy CD. I'm all prepared now, Harry J Allstars - The Liquidator goes straight on.

Also if the floors thinned out and I want the dancers to re-group.