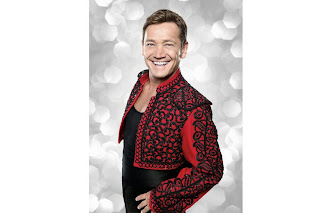 There are 14 people needed for Strictly Come Dancing each year and you can usually guarantee that particular categories of celebrity have been sought in order to fill the show's criteria for a strong line-up.

We have no retired politician this year - I suppose after Edwina Currie and Ann Widdecombe there would have been nothing but comedown in getting Hazel Blears - but otherwise generally we're there with this year's rollcall, I think. Let's see.

Retired sporting hero? Yep, there's Michael Vaughan. If he's bobbins he'll still have time to join the TMS team in India. But cricketers have a very good Strictly record - two of them won the whole thing.
Youthful pop star whose band aren't as good as they once were? We have two. Nicky Byrne from Westlife and Kimberley Walsh from Girls Aloud. Given the success (note: not the talent, just the success) of their two bands, it's an impressive pairing though neither were the main focus of their groups and could walk down my street without me knowing who they are.
Popular soap star of yore? Two of these - Lisa Riley and Sid Owen. The former will also fit the "obese person who will use it as a weight loss experiment" category. The latter, meanwhile, didn't have much rhythm when dancing to his version of Good Thing Going while briefly being a pop star, so may be a bit of a dud.
TV royalty of yore? Sir Johnny of Ball, who obviously the whole nation over 35 will want to win.
Current BBC A-lister? Er, well Dani Harmer, I suppose. I've never heard of her but she seems to be big in kids' telly.
Person from flagship ITV show to guarantee promotion from rivals? And Daybreak again submits one of its stooges, some dude called Richard Arnold. The recruitment of Fern Britton, despite her currently inconsistent career on the light channel, is helpful here too.
Macho sporting beefcake who "needs" to "discover" his "softer" side? Yep, Louis Smith. Though I'm not sure how macho he is in personality, judging by the soft tones of his interviews after winning silver in gymnastics over the summer. But the muscles alone will assist him get votes, even if he can't transfer his rhythm from the pommel horse to the cha cha.
Famous for association with someone far more famous? I don't wish to belittle or undervalue Jerry Hall's modelling career, or her Bovril adverts, but...

That leaves Denise Van Outen, whose role in life is currently hard to pin down but after many years of being really good on telly, even in really bad telly programmes, is now a West End and Broadway star and, to be truthful, it's a surprise to see her doing this. That said, as the longest-standing celebrity crush I've ever had, I'm chuffed she's going to be on there. Get her on the It Takes Two settee on a Tuesday night with Karen Hardy and I may not survive.

Colin Salmon, who has three Bond films behind him, is another one whose recruitment seems quite a coup. I don't know much about him. Victoria Pendleton, meanwhile, was unable to make it more plain she wanted to do Strictly unless she'd invaded the Newsnight studio with a huge placard saying 'GET ME ON STRICTLY'. And after her posturing there'd have been a mild outcry if she hadn't been asked, especially given that she's now retired from her sport.

They get introduced to their partners on Saturday. You just know that Anton du Beke is going to get Fern Britton. This Strictly junkie will be watching every week, as ever.