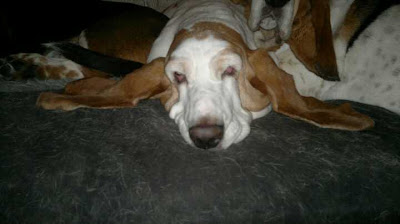 Ruby was in quite a happy, frisky mood this morning when I went to give her and the others their breakfast, so perhaps a Ruby update is in order.

Her eyesight is continuing to decline, but it's hard to tell exactly the speed or the extent. Some days she can walk perfectly in line with anything when it's pitch black, while on others she can barely see her paw in front of her face in bright sunshine.

She's never been a complex dog but she's proving quite baffling here. If there's a sudden change in conditions, like switching a light on at night or putting her outside in the evening, this confuses her. It's as if her sight is at its strongest once it has had time to get used to the conditions around it. As such, Ruby can get out of bed when it's dark outside and, despite the light being on, walk into a wall a couple of times before eventually finding her water or the dog door. It's endearing but obviously it is a little heartbreaking each time too.

Her demeanour, however, hasn't changed despite her occasional frustration and her nose touching brickwork when it shouldn't, and that's key, I think. On top of that, she's as fit as she's ever been despite approaching her tenth birthday - pensionable age for a Basset - and there's nothing wrong with her appetite or her other faculties. She can still bark the place down when Boris won't let her into bed and still roll on her back when she's feeling too lazy to have her lead put on.

On her walk the other evening, she tripped over a kerb, even though she and the others have got used to me saying "ups!" every time we approach a kerb after crossing a road. I've said it to them for as long as I've had them. Her timing let her down and she sprawled a bit. Bassets aren't entirely expressionless, even though the happiest dog still always looks as miserable as sin, and the look she gave me was one of weary embarrassment more than anything. She didn't hurt herself though, and didn't look particularly upset.

Ruby has made it her mission to live the simplest of canine lives since she walked through the door as a puppy who tripped over her own ears and stole an entire chicken pasty off the coffee table while I answered the phone. Somehow, bless her heart, she is continuing to do that despite gradually losing the benefit of the most important sense of all. I love her even more for it, and as the one thing she doesn't experience in all this is pain, I suspect she might be with us for some time to come, even if her sight isn't.
Authored by Matthew Rudd
Email ThisBlogThis!Share to TwitterShare to FacebookShare to Pinterest

Ah. She ended up with the perfect owner. Lucky old girl.

Thank you KK. She's so low-maintenance that she's earned a bit of extra TLC.