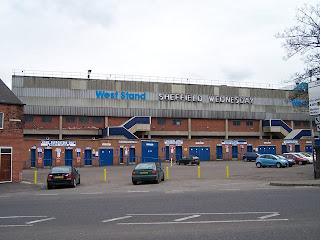 In 1989, society and the establishment hated and mistrusted football fans. If the disaster at Hillsborough hadn't happened, it still would have done somewhere else before long, just as devastatingly, and just as rife with recrimination and bitterness afterwards.

I've been to Hillsborough four times as a supporter and once as a journalist. The latest visit as a supporter was last Saturday. Away fans are given the infamous Leppings Lane end. The road itself is residential, predominantly, and a huge roundabout with a standard Highways Agency sign leads up to it. It's called, somewhat doggedly, the Leppings Lane roundabout. It's a road with national significance but still local meaning. People who live or work on Leppings Lane will be proud of their locality, and there's no reason why not. But that stand, that away end, especially now as the horrors of that semi-final day return to the public psyche, is unmatched as the most gruesome place in football.

It's not the actual viewing area that's the problem. Clearly the crumbled terraces that were divided into three cages - cages, that word still makes me shudder - with inadequate emergency exit facilities have long gone. The stand is now divided into two tiers of seating, with the lower tier not taking up half the allocation but much less of it. And they don't even allow that lower tier to be used. The upper tier only is where away fans go, and to access that tier you have to go through the same turnstiles, up the same staircases, into the same cramped concourses and up the same narrow walkway tunnels to reach the open air that greets you with the game that Liverpool fans used in 1989.

It's not just that these are the same - you can tell they're the same. The concrete floors in what is by some distance the most unroomy concourse I've ever experienced in nigh-on 80 grounds is ancient. The catering staff stand behind age-old cages, like exhibits in a Victorian asylum, dispensing the pies and ale from under a hatch measured at just big enough via millimetres to fit an open bottle of beer through. The walls are undecorated, the toilets awful, the whole place dusty, unloved, untouched, utterly bleak. I'd been before, in similar numbers with other Hull City supporters, but perhaps because - no, absolutely definitely because - the lethal combination of rank facilities and an attitude by the authorities ranging from suspicious to evil had finally been fully exposed to the world, 23 years after 95 funerals had been held and one life-support machine was ticking over, I felt at my most queasy and uncomfortable there.

Sheffield Wednesday own this ground, and this end within the ground. I have no idea what the facilities are like for home fans in the other three stands at Hillsborough. They may be similar, they may be totally removed from what the visiting supporter paying £28 to watch his team has to endure. But the very notion that they haven't actually touched the access and indoor sections of the most notorious stand in football since it contributed majorly to the deaths of 96 people, even after all this time, is pretty much unforgivable. Maybe they have plans to do so - if so, these plans are long overdue. Maybe they should raze the whole damn end to the ground and start again. Not one person would mourn it.

Hull City won the game and I left the stadium with very mixed feelings indeed. Satisfied with the result, shocked at what we had to put up with. This is without the continued stinking attitude of South Yorkshire Police, whose current incarnation seem hell bent on putting football fans in their place for daring ever to question their authority, judging by the relief sent to look after men, women and children of all ages who wear black and amber scarves and wanted to watch their team play in comfort, safety and - lest we forget - with a bit of fun. Football is sport. It should be a fun experience to watch it.

I've only been to Hillsborough once and I actually sat on the Lower Tier in the far left block of seats before the corner flag. I actually went to see Sheffield Wednesday vs. Newcastle United on a trip from College and seemed to think I was in amongst the Sheffield Wednesday fans. I can only assume that Newcastle were in the North East Corner as I can't actually remember where they were.

I didn't use the concourse as I had eaten before I got to the ground and beer wasn't an option because I was only 17! From memory though there isn't much of a concourse to speak of for the lower tier. Is it that the lower tier shares the same concourse as the upper tier?

Out of interest, how many tickets did Hull City sell for last Saturday? Was all the Upper Tier occupied? (Sorry, I can't remember from what I saw on The Football League Show)

Matthew - the facilities are actually good for home fans in the other three stands. I've been in the Leppings Lane end on 'home away days' and, as you quite rightly say, the experience is poor and an eerie reminder of 1989. I can understand why it hasn't changed since that day, however. In the early nineties grounds required more urgent changes - such as the conversion to all seater stadia. In the later nineties and into the current century clubs began to give their grounds cosmetic facelifts or move all together. Sheffield Wednesday simply did not have the money to do this. It is absolutely true that in this period the club (on many occasions)stopped staying in overnight hotels for distant fixtures.

Now, under the financial stability of Milan Mandaric, and unsurprisingly the resurfacing of the Hillsborough issue, much talk has been had over the stand. It is to my understanding that the club hope to improve the experience of away fans sooner rather than later, and pending a sustained period in the Premier League, knock the stand down and build again from scratch. I really hope this is the case to bring an end a saga that has gone on for far too long - why it wasn't bulldozed in the 1989 close-season I'll never know.

Lee - I'm guessing this was in the mid-to-late nineties when the lower tier of the Leppings Lane end was a mixed/neutral fan area for families or large groups. The Newcastle fans where probably housed in both the upper tier and NE corner.

Lee, the majority of the upper tier was occupied, though I think the price put some people off. Pity, as the closeness of the game and the fact it was a Saturday afternoon - something we never get with trips to Leeds - meant it was a doable family day out.

Hugh, thanks for the comment. Some Wednesday fans on Twitter have said that the turnstiles and access stairs have changed since 1989 - if so, fair enough, though they've soon aged - but the concourses are the main issue.

The events of Hillsborough changed the way we watched football,and whats more the look of our grounds. Antiquated stands,unfit for purpose were pulled down,and many teams started to look as supporters as customers of their product,rather than the cashcow they'd milk to death season by season.

But one thing remained.The Leppings Lane end. The stories still rumble on why Liverpool fans were allocated that end of the ground,(when the covered Kop end of Hillborough,in 1989,held 22000 standing),but the stand,and the tunnel that saw 96 of our fellow football supporters enter and never return one April afternoon,still remains like some macabre monument.

The club have now had 23 years to build something that would be befitting to the modern game,and the modern supporter.And although,I appreciate that in the last 5 years,financial issues have caused the club to sail close to the wind on more than one occasion,take into consideration that in the early to mid 90s, they afforded such luxuries as Chris Waddle,Des Walker,Wim Jonk,Paolo Di Canio,Benito Carbone,and others - all on 6 and in some case 7 figure salaries,with 30k plus gates in the top tier of the game.So the funds have been available,although that it is not now the case.

In that period,clubs smaller than Wednesday rebuilt all 4 sides of their ground on much smaller incomes,whilst board after board,and owner after owner seemingly sat by and thought it right to leave it be - and in some case,literally,just slap on another coat of paint.So I truly hope Mr Mandaric can find in his heart to do the decent thing- that to find the funding to give the ground a stand that is of the highest quality,that offers the very best to both home and away fans,that is modern and fit for purpose,and that is the safest in the whole league.

If he can do that,then the game can finally move on,and the last reminder of what occurred on April 15th 1989 can be considered to the landfill site,and to history.

But football supporters will never forget the 96.May their names live on...