"It involves cables, but I'm not going to say any more than that..." 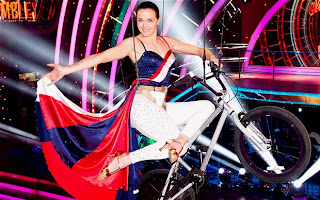 Victoria Pendleton has improved markedly as a dancer, but is unquestionably the weakest in the field now, combining a remarkable ability to lose her steps and never recover with a general lack of personality on the floor. It's quite tough to watch her now, as she comes across as chirpy and competitive and approachable when in the training room or on Zoe Ball's settee, but gets all serious and flinchy at showtime. And yet the public saved her.

She deserved to be in the dance-off after Saturday's showing at Wembley Arena (which Tess Daly called "iconic"; two words - it isn't) but did the regular thing of crawling from the bottom two after the lines closed, leaving the dull but effective Nicky Byrne on one of the rungs. And the show lost its funniest and most effervescent character in Richard Arnold as a result.

The Pendleton block vote comes from her Olympian achievements, of course; as a sportswoman who is also decorative, one can't imagine she's getting loads of votes from that sector of women that claim partaking in physical sport to high levels ruins your femininity. But for the majority who see sports people as just that, especially ones who took gold at the biggest event on earth, she's seen as someone who deserves to stay in the competition because she was brilliant on a bike. It must be the reason, as she isn't justifying her survival as a dancer at all.

Arnold's exit is a shame as he transformed the notion that someone half-noticeable on ITV should remain half-noticeable during their tenure on Strictly. Camp as a teepee and as funny a man as the show has ever hired, he ultimately paid the price for his lack of rhythm in the latin section. That he could have fun as a latin dancer and rack up points with the ballroom disciplines was a trait that could only take him so far, though with Pendleton still surviving, it's disappointing that he didn't carry on at least another week. And he wasn't helped, I'm sure, by the singing of Club Tropicana being subject to some kind of technical failure in the arena.

Still, if the man has ambitions left in telly, his handful of weeks mugging to the crowd, outwitting Bruce Forsyth and the judges on a week by week basis and generally managing to progress as a dancer while always happy to send himself up will help him achieve those ambitions.

Pendleton and Byrne are the next obvious knockouts though much depends on whether the remarkable Michael Vaughan can maintain his improvement levels and get somewhere in the latin rounds. His American Smooth on Saturday was superb, and to see him third overall and therefore a shoo-in for the next stage was a feeding time moment. He, along with Byrne and Pendleton, won't make the last three, irrespective of what order they exit the show, but as for who will, that's entirely up for grabs. And I rather like that.

The obvious three seem to be Denise Van Outen, Louis Smith and Kimberley Walsh. The former is relentlessly delivering each week, but there are issues for the other two - Smith is dividing the judges and his marks are inconsistent, while Walsh found herself in the dance-off the other week, suggesting a public apathy (though it could be just because Cheryl Cole was in the crowd). A continuing uncertainty for either of these two should act as music to the ears of my own dark horse, Dani Harmer, whose potential seems to have been entirely lost on people. Lisa Riley is probably too reliant on being a "character" to make the final but has real hope for it nevertheless.

As for the show itself, it looks like Craig Revel Horwood has been instructed to end any negative reviews with at least one positive, something which takes the gloss off his candour as a judge, though if he means it, then there is no reason to grumble about it. The panto booing really gets on my nerves, especially as it's obvious the contestants - and their professional partners - are far more interested in what he has to say than the other judges.

Two other things from the Wembley Arena show: firstly, Girls Aloud were actually great, and secondly, why did we need half a dozen close-ups of Rory McGrath in the crowd? Is he Dani Harmer's uncle?
Authored by Matthew Rudd
Email ThisBlogThis!Share to TwitterShare to FacebookShare to Pinterest