A final shift at Television Centre 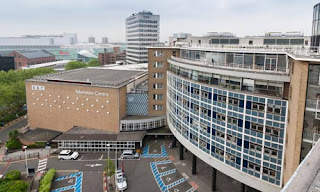 My friend Callum, whom I've known for ten years, has just finished his final shift at Television Centre before he and his BBC News colleagues decamp to Broadcasting House. He took the opportunity to write a note on his Facebook page detailing his memories of the place. It's absolutely immaculate and he has generously given me permission to reproduce it below:-

(I'm in the middle of my final shift in the newsroom at BBC Television Centre. You know the address off by heart, I expect. Wood Lane, London W12 7RJ. My job is moving to Broadcasting House in central London next week. For all the hue and cry about my employer selling off the home of showbusiness, there has been remarkably little said about how to many people, this is not much more than a nicely-shaped office block, handy for the Central Line. It's riddled with asbestos and mice. There's nothing for miles around, except for the gargantuan cathedral of retail which opened across the road a few years ago. There is, it has to be said, a bar on the fourth floor, thank God. I'll be quite pleased to leave. But I'm also quite pleased to have worked here. I've written a few thoughts about it.)

I didn't want to work at TVC because it was the home of the biggest and most famous news operation in the world. I wasn't that attracted by Graham Dawbarn's doughnut of brilliant and brutalist glamour. I wanted a job there because it was where my girlfriend worked.

So one Wednesday in the summer of 2005, eight days after terrorists had gone to blow up the Tube, and couldn't, I was shown through the glass gates of Stage 6 and told to get some news on the World at One.

I wasn't terrifically successful. A few hours' work experience didn't cut the mustard when I returned a week later for an interview. A fellow candidate I'd chatted to that morning in reception beat me to the job.

A couple of months later, there was a phone call and a sleeper train arranged hastily from the north. This time, I passed the interview and on December the 28th, 2005 I sat down next to Brian Perkins (Brian Perkins!) for my first day proper.

My girlfriend still worked at TVC. Her job was in what I came to realise was the "showbiz end", where work also meant laughter and lunch. Soon afterwards she left the BBC but, thankfully, not me. (As the saying goes, reader: I married her.)

The newsroom became my routine. Three on, three off. On that first day there was Champagne after the six o'clock news. There was none on the night shifts. The need to deliver quality first means there is none at any time, now. But 2am breakfasts are still on sale in the Foyer, and I've shared plenty.

There followed seven years, on and off. Once, we snuck into the empty Newsnight office for a peek at the Paxman empire. It was at TVC in the humour-deprived small hours that I wrote an inconsequential news story which gave Charlotte Green a fit of the giggles. You can find it on YouTube now.

Other memories: a colleague hacking into the first-floor chocolate dispensing machine one humid weekend and filling his Panama hat with Minstrels. Christmas carols rehearsed in the basement and performed in the church on Uxbridge Road (St Stephen and St Thomas: the martyr and the doubter.) That basement was the venue for a few angry union meetings, too. I always got lost trying to find the right room. We walked out on strike at midnight more than once, and for a few months we walked out every Monday in support of our colleague Alan Johnston, kidnapped in Gaza. There was a weekly silent vigil, 3pm in the car park. I was here when he walked around the newsroom, free again, and shaking hands.

I was up all night on Up All Night. Occasionally, I was embarrassed on air by Dotun Adebayo. Ben Jacobs fed us so much honey cake once, in honour of Rosh Hashanah, that I couldn't speak. My first time presenting half an hour of national radio and the weather forecaster, due on at 28 minutes past 5, failed to appear. I can't remember what I said or how I filled the space. I don't want to remember, that much.

I made too many friends at TVC to write down now, for fear I'd miss someone and offend them. I miss the brilliant Julian Krause. There was a story told at his funeral about the time he took a roll-your-own smoking break under a balcony just as the Real IRA blew up a taxi on Wood Lane. With his ears ringing and bits of black cab raining from the sky he turned to Corrie Corfield, fag aloft, and asked: "Blimey, Corrie. What did you put in this?"

At 3am on a Sunday there was not a lot of showbiz to be found at TV Centre. Thankfully, there was a lot of wit.

Brilliant.
Authored by Matthew Rudd
Email ThisBlogThis!Share to TwitterShare to FacebookShare to Pinterest

Thanks. Now this is on the public bit of the internet I feel I should make a couple of acknowledgments: to my former colleague Dave Treanor, who told the story at Julian's funeral that I've recounted. Also to Jake Arnott, from whose (rather good) novel "He Kills Coppers" I've borrowed the reference to the church in Shepherd's Bush.

I'm writing this from a desk in new Broadcasting House. It's much, much nicer!